Emmanuel's Blog
Home Uncategorized ‘Kamala Harris will be impeached in 2022 if Republicans take back the... 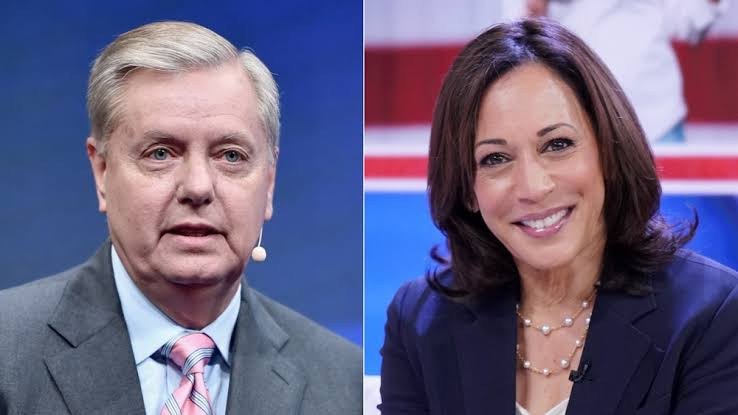 U.S. Senator and Trump ally, Lindsey Graham has warned that if Republicans take control of the House of Representatives in next year’s mid-term elections, Vice President Kamala Harris could face impeachment for her tweet supporting a bail fund for Black Lives Matter protesters over the summer

Speaking in an interview on “Fox News Sunday,” a day after the U.S. Senate acquitted President Trump, the South Carolina Republican said the former president’s impeachment trial, brought forth because of the deadly Jan. 6 Capitol riots, “opened Pandora’s Box.” and would make Republicans want to pay back.

“If you use this model, I don’t know how Kamala Harris doesn’t get impeached if the Republicans take over the House, because she actually bailed out rioters…,” Graham said of the former California senator

“So we’ve opened Pandora’s Box here, and I’m sad for the country.”

On June 1, 2020, Harris tweeted a link to a fundraiser for the Minnesota Freedom Fund and asked her followers to chip in to help post bail for protesters in the city following outrage over the police killing of George Floyd.

Like many Republicans, Graham equated the deadly siege on the U.S. Capitol last month with last summer’s racial injustice protests.

Since Trump’s acquittal by the US Senate on Saturday, Republicans have began planning offensives on how to recapture the senate and House in the next elections and lay out their own agendas.

‘Blackmail won’t win, we were acting foolish and joking’ – US lawmaker Madison Cawthorn defends himself after his x tape thrusting a man’s face...

‘To anyone who would consider interfering from the outside, if you do, you will face consequences greater than any you have faced in history’...