Emmanuel's Blog
Home Blog “We win some and lose some” – Nigerian doctor narrates how he... 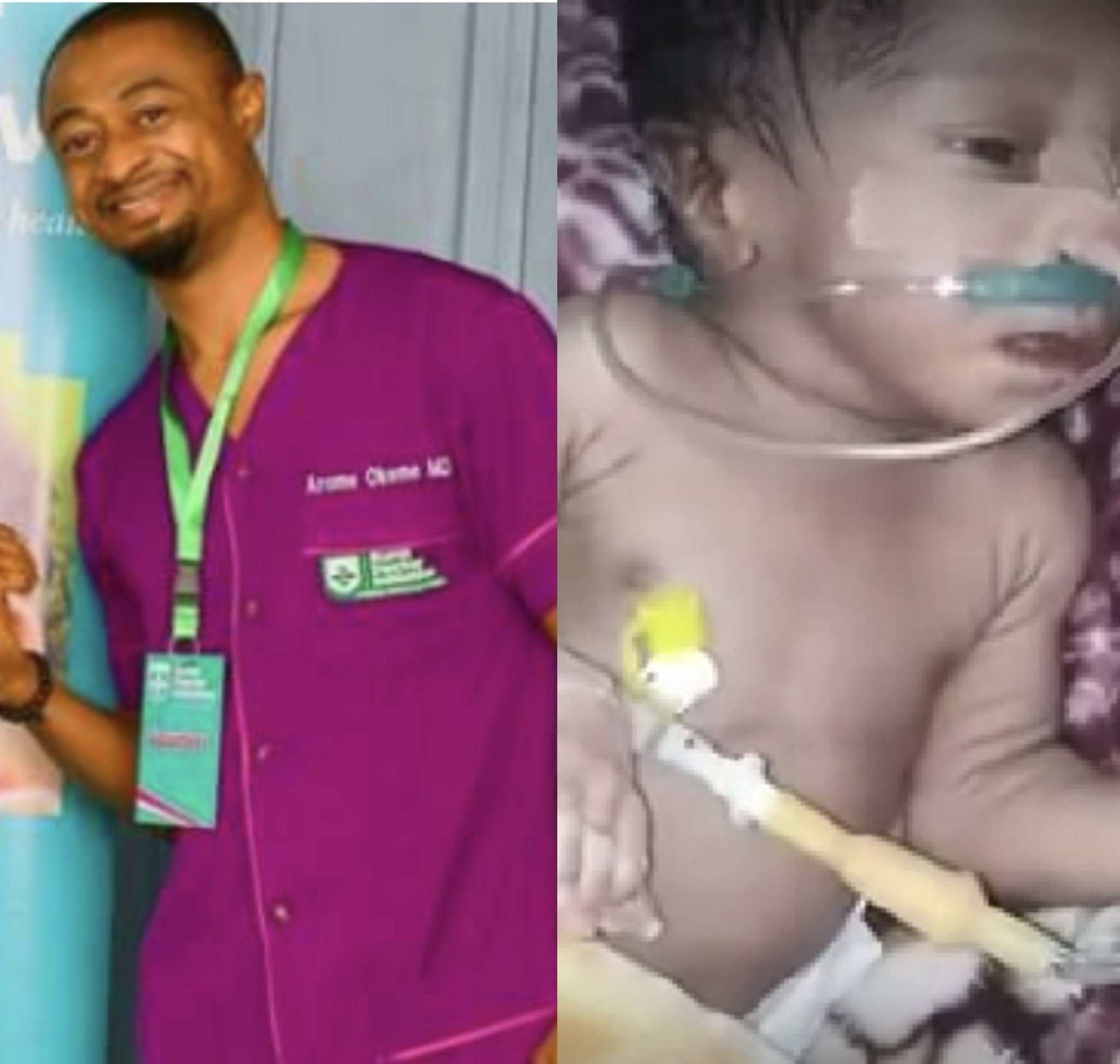 A Nigerian doctor, Arome Okeme, has narrated how he battled from last night to the early hours of Tuesday February 23, to save two of his patients.

Taking to Facebook, he revealed that the patients; an 8-day old baby and a 22-year-old lady, who ingested two tablets of rat poison, died between 11pm on Monday to 6am on Tuesday, February 23. 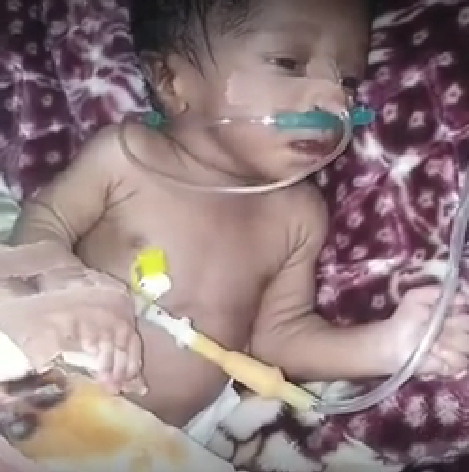 POISON AND SEPSIS: THE GRIM REAPERS.

I walked straight to my bed at about 7am and dove in. Sleep met me mid-air before I even touched the surface of the bed almost instantaneously.

The preceding hours had been tortuous. I first got a call from the hospital at about 9.30pm. Emma, once again, was on duty. A young man and his wife had brought a female baby whom I reckoned was rather too small for age from my perspective.

The mother had been delivered of her via caesarean section 8 days ago because she was at risk of convulsing as her blood pressure was said to be very high, something we term severe eclampsia and preeclampsia respectively. She was only as far as 35weeks then. Mother claimed she wasn’t told the baby’s weight at birth. The husband however bore witness to the fact that the baby cried very well after birth. She weighed 2kg here.

The complaint was that of a high fever, difficulty in breathing and excessive crying of 2 days duration.

Monitoring was 1 hourly to ensure the patient was closely watched. SPO2 at presentation was 75%. With oxygen it scaled up to 92% and remained steady around that range. We were running on a power generating set that usually was on from 7pm to 10pm. We had an oxygen concentrator that used power only. I ordered the generator to be refueled with the remaining gas so as to run the whole night.

At about 1am, a young lady was brought in restless. She was said to have ingested 2 tablets of rat poison (I have never seen a rat poison tablet before) 4 hours ago. I shook my head, while Dr. Onyeka, my colleague, went to work. She retched and vomited and laid unconscious. Vitals were unstable as he went ahead stabilizing them. He ordered a barrage of investigation and medication and we commenced treatment.

At about 3am, the nurse called my attention that the lady wasn’t breathing again. I checked, performed CPR but nahhh, she was gone. I confirmed and certified her death.

Emma is one very efficient hand. Unwearied, he went from one patient to the other, mostly having to wash his hands thoroughly before touching the neonate, to administer treatment. It was hectic.

At about 5.30am, the light threatened to go off, and again it repeated the same episode of epilepsy. The generator muscled one last strength to maintain it but unfortunately, it died. The light too.

About an hour later, the child commenced gasping, I called for the AMBU bag, we tried but to no avail.

A beautiful baby girl breathed her last and left the world that was to be her home. We probably failed her. Our perennial power problem in the country failed her.

I certified her death and wiped my forehead. The mother wailed in muffled breaths while the husband stood outside distraught. The lady had had a miscarriage some years ago and this was the first pregnancy she would carry this far.

All drained, Onyeka left the clinic to catch some sleep. I noticed the disappointment in his demeanor as he strolled away. I consoled myself by saying that we win some and lose some, life must go on.

I walked straight to my bed at about 7am and dove in. Sleep met me mid-air before I even touched the surface of the bed almost instantaneously.

The life of the rural doctor. Everyone deserves good health. 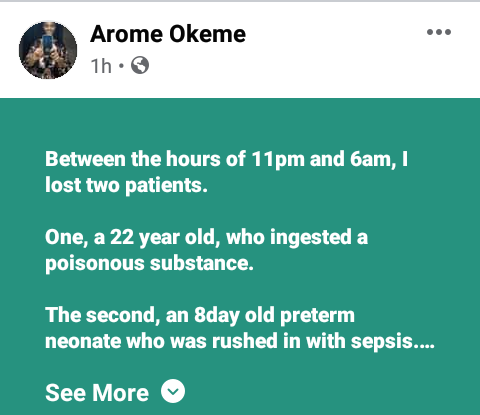 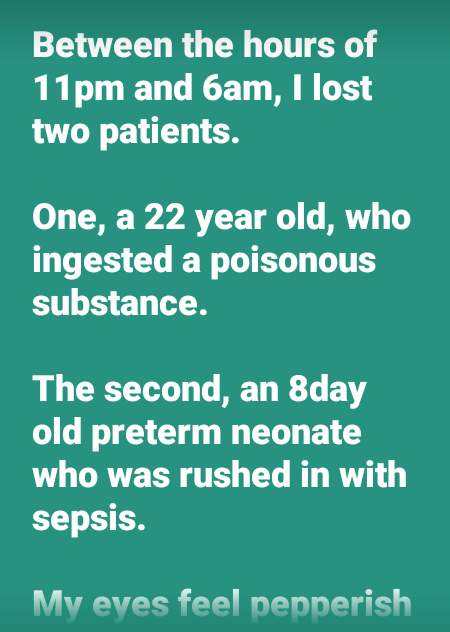 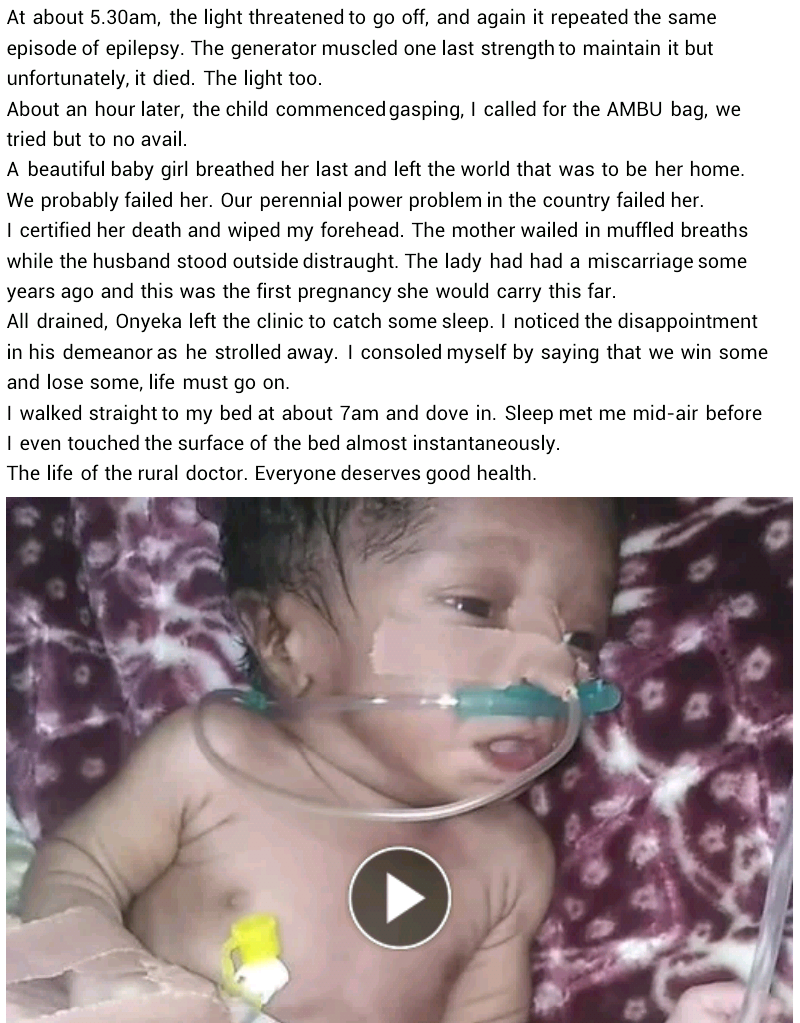 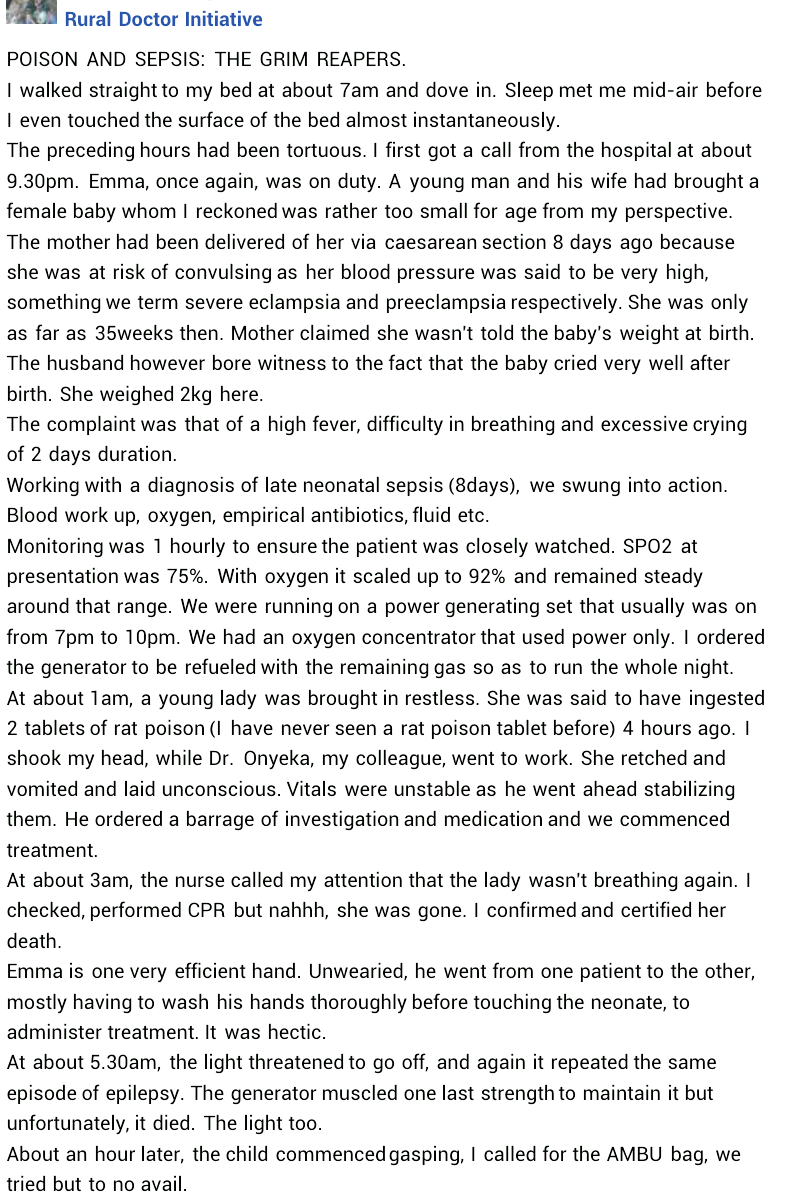