Emmanuel's Blog
Home Blog Australians plan to boycott snickers chocolate after learning it is made in... 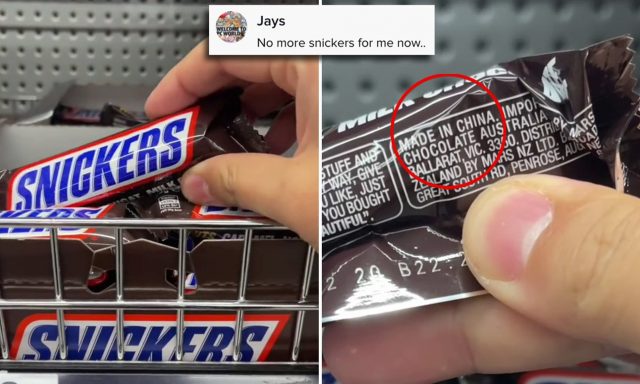 A TikTok video revealing that Snickers is made in China is turning Australians off the chocolate bar who say they will be boycotting the brand for good.

The video was uploaded to the social media site by Jeremy Toh after he made the discovery while shopping at a Woolworths on Sunday.

Footage shows a variety of chocolate bars stacked on the shelves at the supermarket before the camera pans up to a box of Snickers.

‘Did you know your Snickers are no longer made in Australia?’ a voiceover says.

The man grabs a chocolate bar before turning it over and aiming the camera at the packaging where it is revealed the bar is made in China.

A spokesperson from Mars Wrigley, which manufactures the bar, said the company had to temporarily source the product from China while their facility at Ballarat, in regional Victoria, underwent a multi-million dollar upgrade.

They also said the Australian facility will begin to produce the bars later in the year and the locally-made product will hit supermarket shelves by next year.

The TikTok video has already sparked outrage, with many Australians declaring they will no longer be buying the chocolate bar.