Emmanuel's Blog
Home Blog Man accused of luring his ex-girlfriend out, beating her and forcefully taking... 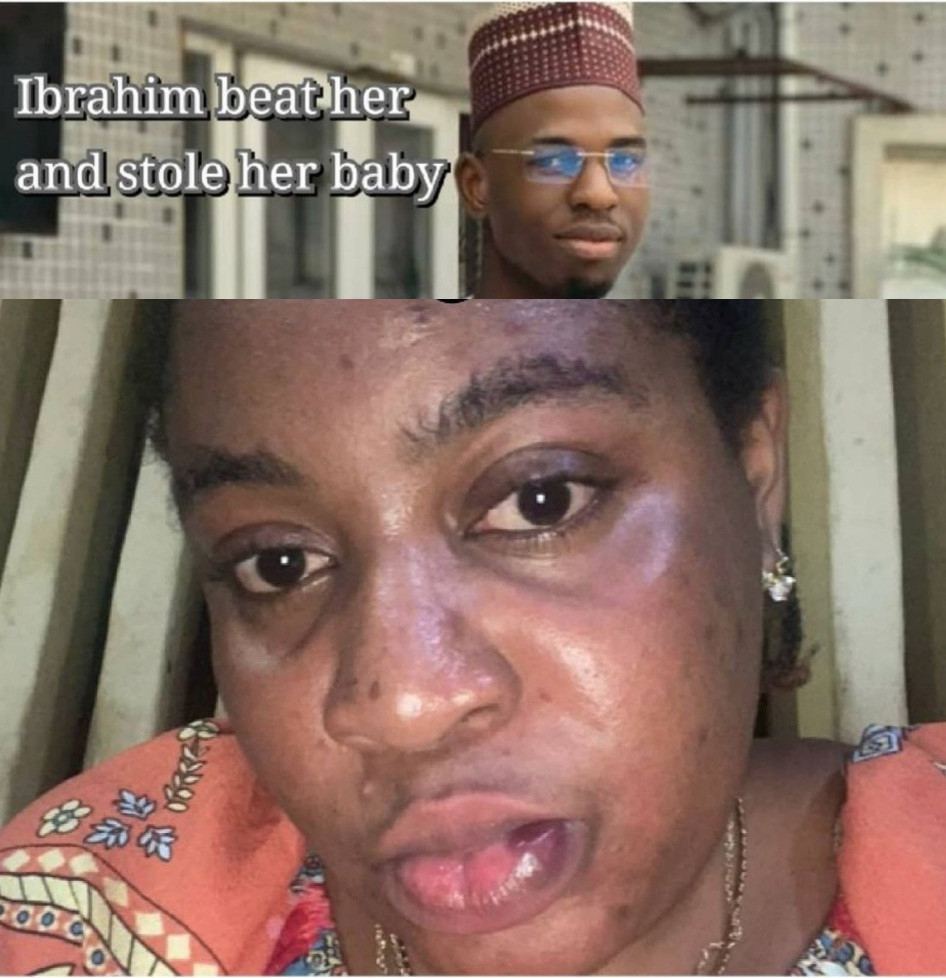 A nursing mother who has been forcefully separated from her child is crying for justice as she claims her child’s biological father lured her out, beat her up, then forcefully took the baby from her.

The mum says the case has been taken to the police station but her child’s biological father, who had denied the pregnancy and even told her to abort it, boasted that he has millions “to spend on the police”.

Narrating how it all began, the nursing mother said she met Ibrahim Oladipo in 2018 and they started dating after he asked her out. She became pregnant and told him but she said he and his mother told her to abort the baby.

She said she decided to carry the child to term and while pregnant, she met a man named Lekan who indicated interest in marrying her. She told him she was a few months pregnant and he said he was still willing to go on with the wedding. To show he meant his words, he did an introduction ceremony and started paying the pregnant woman’s hospital bills in addition to what the woman’s parents were paying. Lekan continued to pay the necessary bills after the child was born.

However, when the baby, a girl, was 5 months old, Ibrahim is said to have returned, demanding a DNA test, which eventually showed he’s the biological father.

As the nursing mum, her fiance, and her family were planning her wedding, which was supposed to hold in May 2020, Ibrahim is said to have approached the girl’s family to say he wanted to marry her. As a result, her wedding with Lekan was put on hold.

When Ibrahim was asked to come with his family to collect the engagement list, he disappeared and returned two months later to say he didn’t want to marry his child’s mother again.

The nursing mother said she later discovered it’s because he had impregnated another woman.

She said time passed and Ibrahim Oladipo tricked her into meeting him at a restaurant in Lekki. When she got there with her 11-month-old baby, she said Ibrahim beat her up until she became unconscious and when she woke up, she found out he had absconded with her baby. 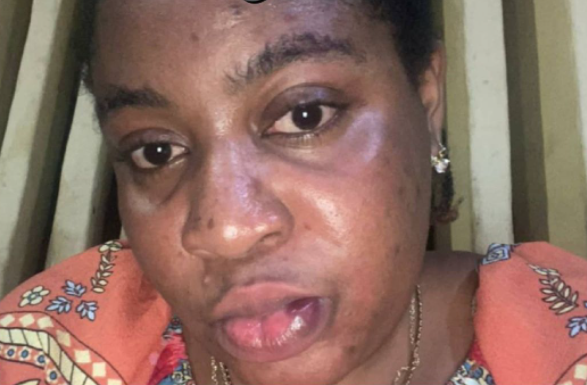 The nursing mum after she was allegedly assaulted by Ibrahim Oladipo

She said she didn’t set eyes on her baby for two weeks until June 2, 2021, when they were invited to the Police State Headquarters in Ikeja.

She added that prior to that, all efforts to get Ibrahim to come for a peaceful resolution had been unsuccessful and he boasted that he has the money to make the case go in his favour.

At the police station, she said her heart broke when she saw the state her baby was in. She said a fight broke out when she tried to touch her baby and the police handed the baby to Ibrahim then threw her and her parents out of the station.

The mum reiterated that Ibrahim never wanted the baby and asked her to abort it, yet he’s now fighting to take the child from her. She added that he’s a 25-year-old student without a clear source of income and she’s worried he isn’t taking good care of her baby due to the state she saw the baby in at the police station.

She’s asking Nigerians for help in getting her baby back.

Read her story, shared by activist Dr. Yolanda George-David, below. 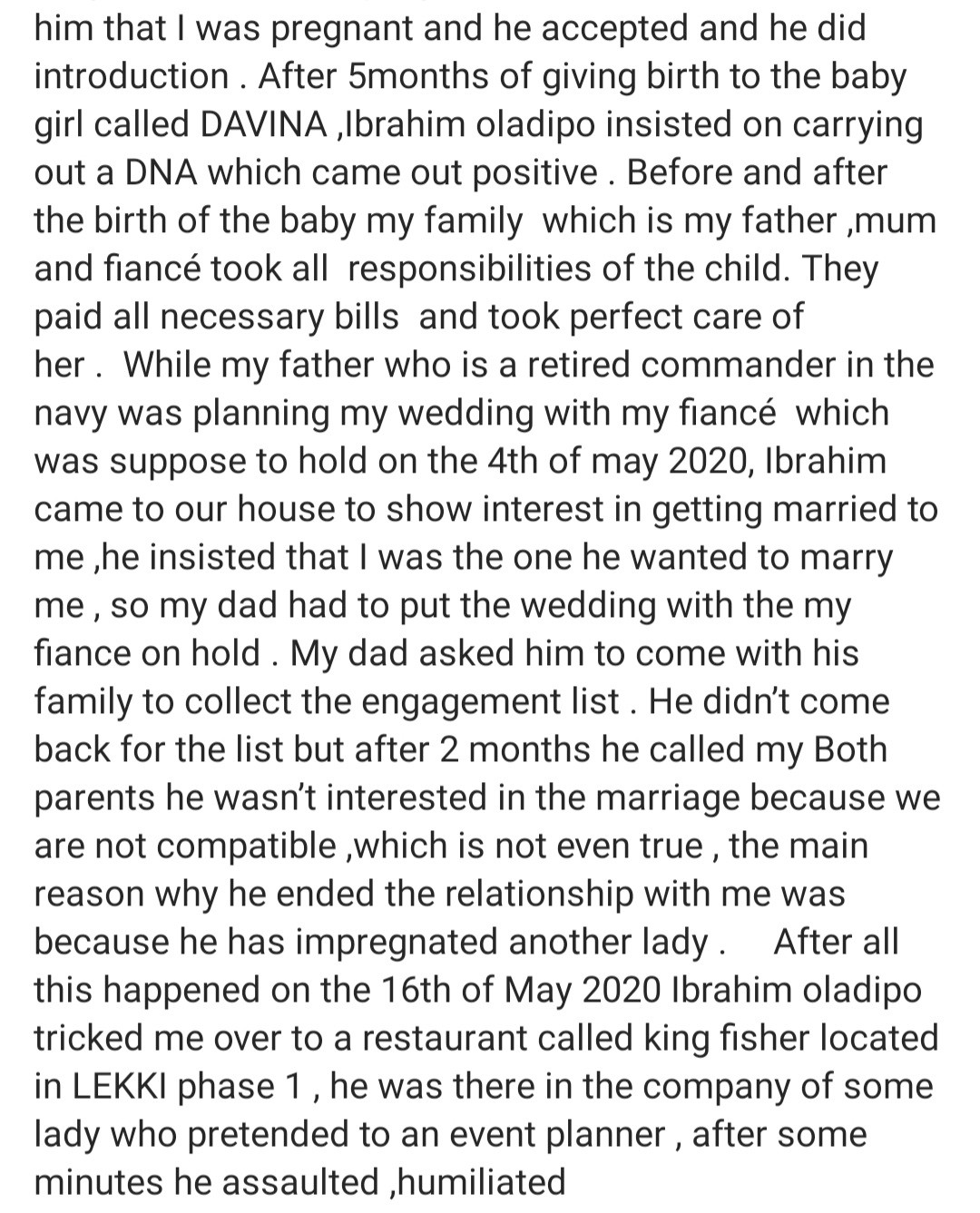 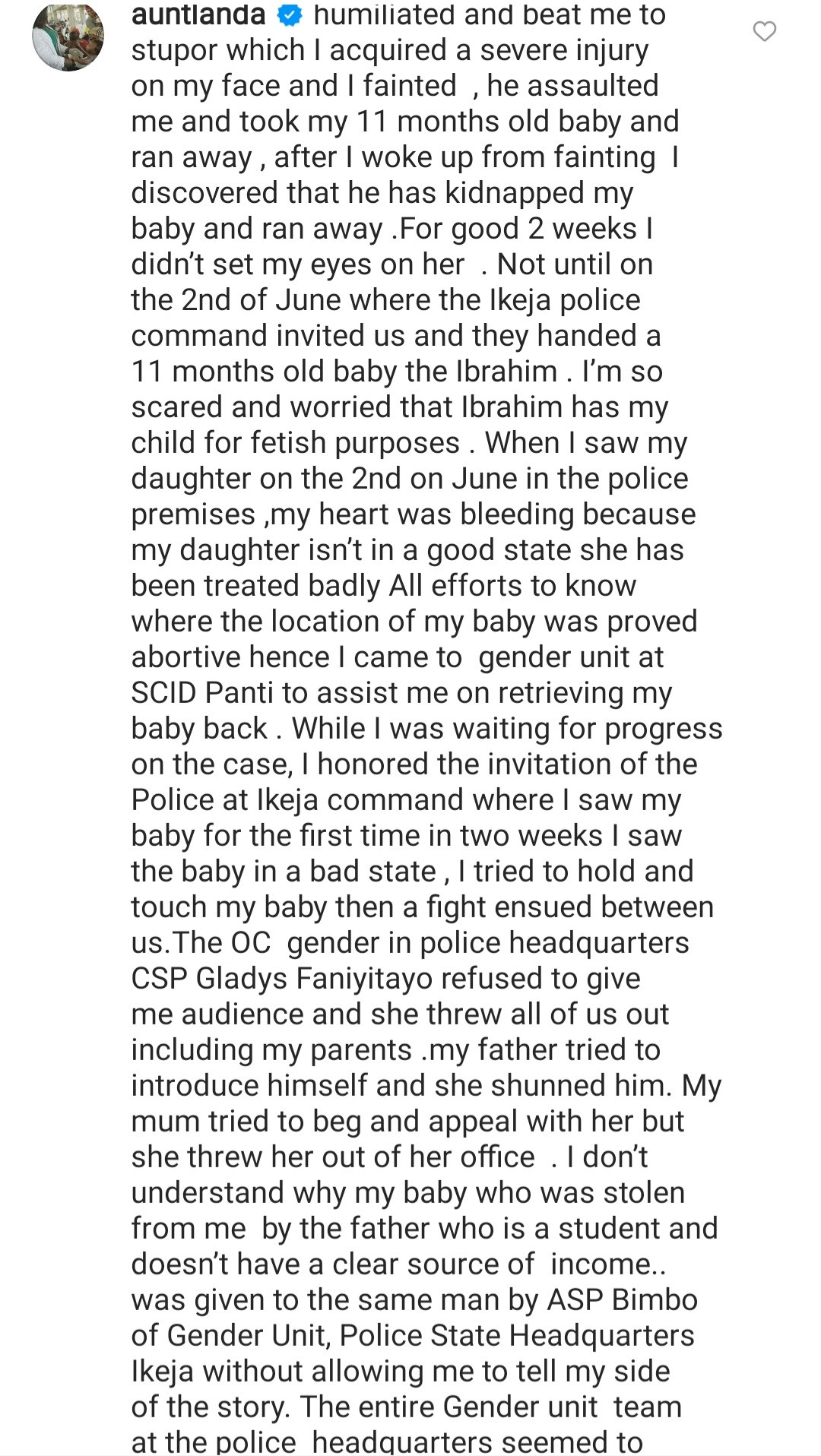 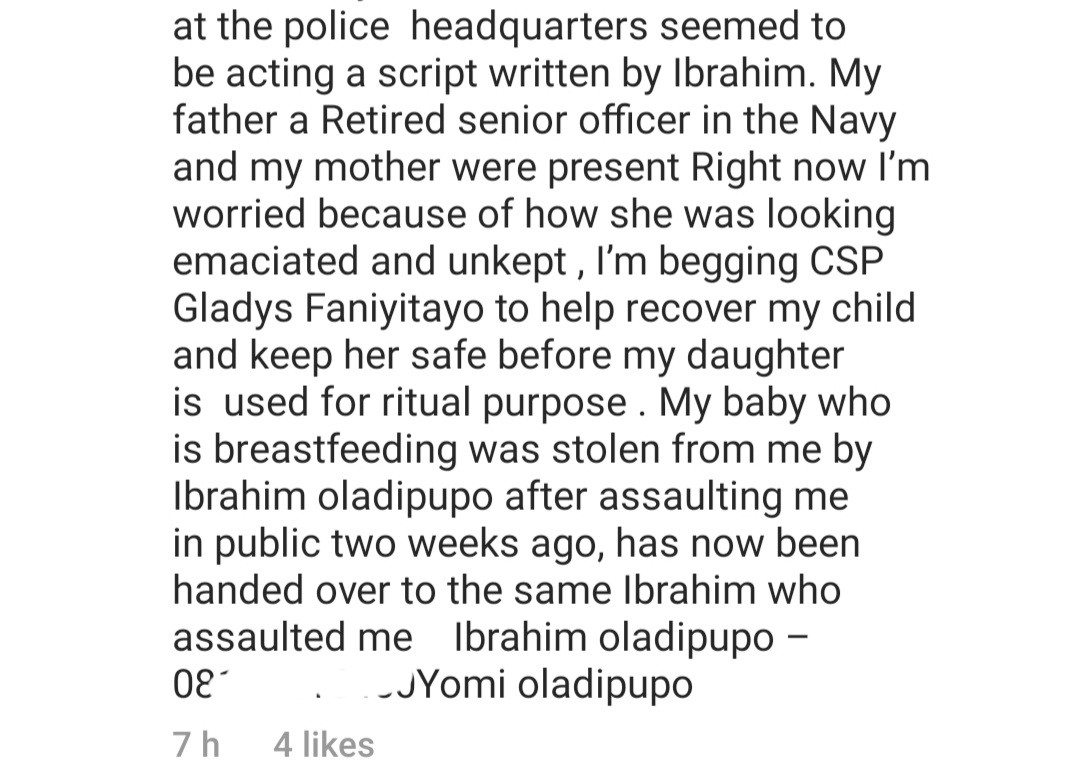 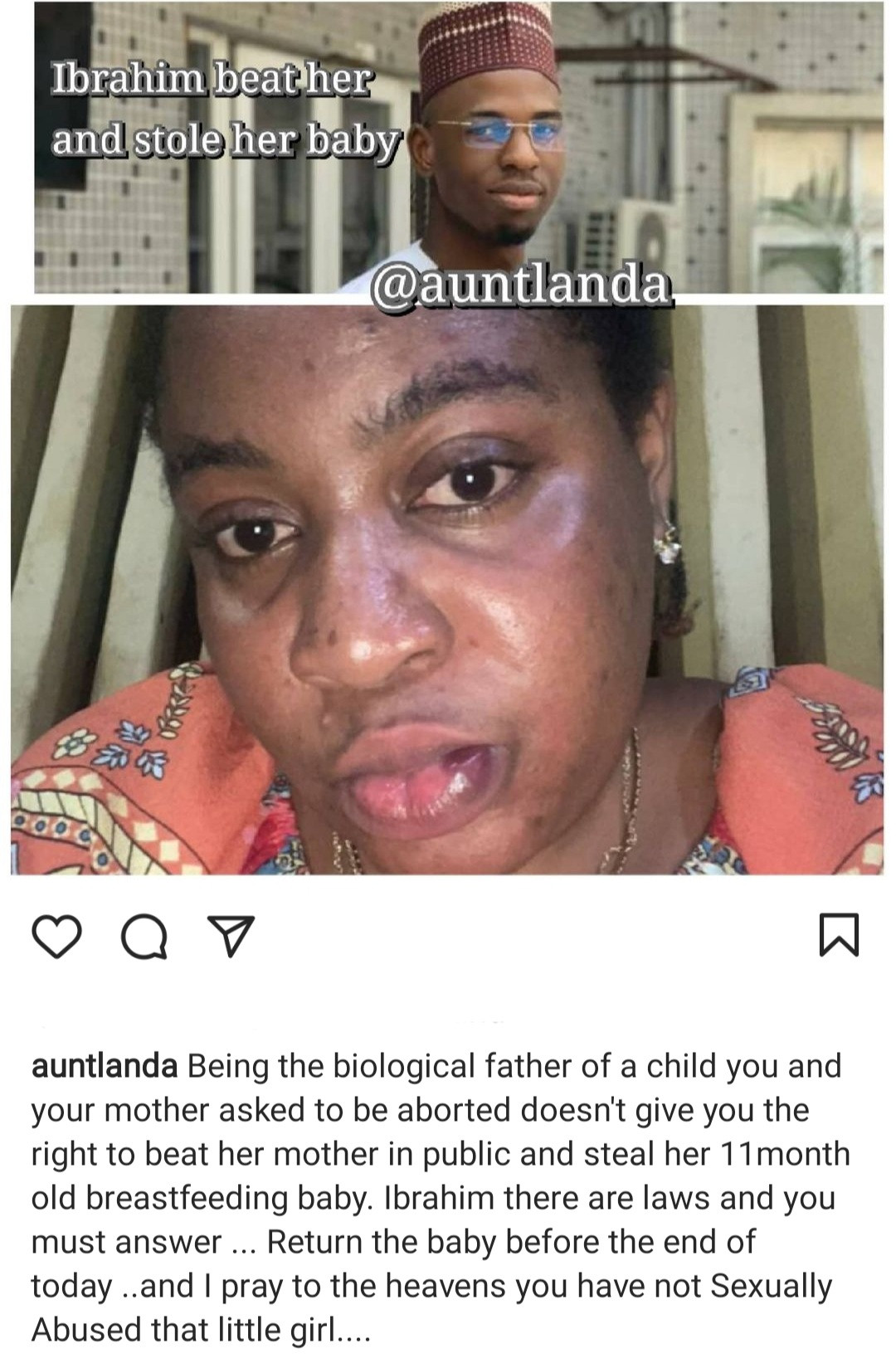