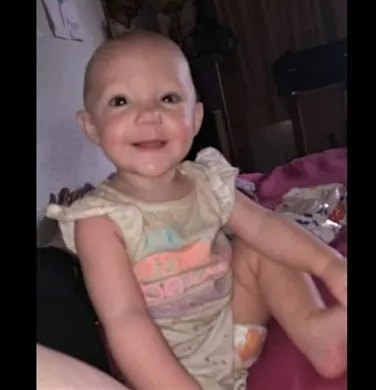 An Indiana baby reported missing by her parents after they left her with a relative to get a break, has been found dead, officials said.

The body of 11-month-old Mercedes Lain was found in a densely wooded area on Wednesday night, August 18, after days of searching for her in rural northern Indiana, US, according to the FBI.

Justin Miller, 37, the person responsible for caring for the baby, was arrested and charged with neglect of a dependent resulting in death.

In a probable cause affidavit obtained by WSBT, a Plymouth police officer wrote that Mercedes’ parents, Kenneth Lain and Tiffany Coburn, said they left their daughter with Miller, a relative, on Friday so they “could have a break” but he hadn’t returned her on Sunday, August 15. Officials have not confirmed whether the parents are related to Miller.

On Sunday, August 15, Miller told investigators Lain had contacted him about buying synthetic marijuana and Lain began talking about the “rough time” he and Coburn had with Mercedes, according to the affidavit, and Miller said he offered to care for the baby to give them a break.

But Miller’s recollection of the days he cared for Mercedes “changed several times,” and he told investigators he left the baby with a woman at a motel where her parents had been staying, the affidavit says.

After Miller was interviewed numerous times, Chipman said Miller led investigators to Mercedes’ body in a wooded area of Starke County on Wednesday.

Miller told investigators he woke up at a home Saturday in Mishawaka, near South Bend, to find the girl had died and he disposed of her body, WXIN reported.

Her cause of death had not been determined as of Thursday, August19.

Mercedes’ parents have been charged with neglect of a dependent after police said they had been “uncooperative” during the search for their child. According to the affidavit, both parents were difficult to find after reporting their daughter missing.

Asked whether her parents knew what happened to Mercedes, Chipman said “there’s no proof, evidence whatsoever that they knew the ultimate outcome.”