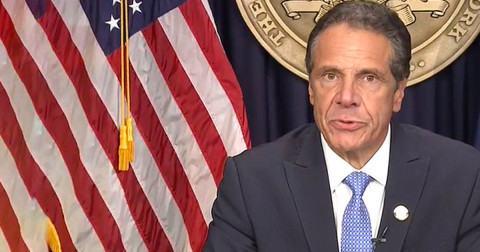 Cuomo’s decision to step down comes a week after the New York attorney general’s office released the findings of an independent investigation into sexual harassment allegations. The report found that Cuomo allegedly sexually harassed 11 women.

Cuomo had denied all allegations against him claiming he is innocent but in recent weeks he has faced pressure from the Democratic party leadership and president Joe Biden to resign.

The New York House of Reps were planning to begin impeachment proceedings against him this week.

Cuomo making the announcement on Tuesday, says the resignation will be effective in 14 days. He announced that New York Lt Governor Kathy Hochul will replace him.

‘The best way I can help now is if I step aside and let government get back to governing,’ Cuomo said in his address around noon. ‘And therefore that’s what I will do, because I work for you and doing the right thing is doing the right thing for you. Because as we say, its not about me, it’s about we.’

‘This transition must be seamless,’ Cuomo said. ‘We have a lot going on. I’m very worried about the Delta variant, so should you be, but she can come up to speed quickly.’

Glavin criticized the attorney general office’s investigators and said, “This was not about an independent review of the allegations and the circumstances surrounding them’.

US Congressman-Elect Santos Investigated for Lying About His Past