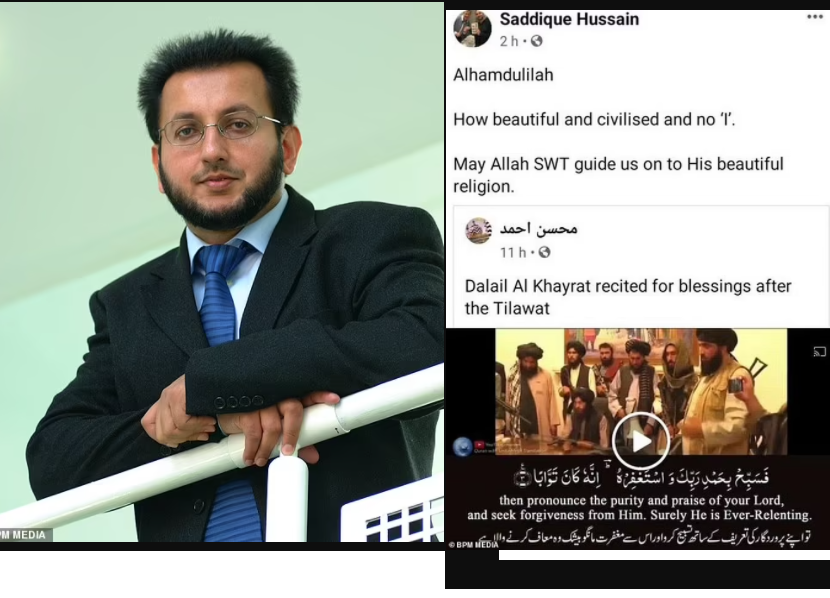 Saddique Hussain, general manager of Central Jamia Mosque Ghamkol Sharif in Small Heath, Birmingham, was quizzed by officers after he shared a video showing an armed group of Taliban leaders in Kabul on his Facebook page.

The post has now been removed and the mosque manager has issued a full apology for any offence caused after he was issued a warning by police.

Mr Hussain said he ‘does not and never has supported the Taliban’ and ‘should have thought before he shared the post’.

In the post, Mr Hussain shared a video showing an armed group of Taliban leaders at at the presidential house in Kabul reciting from the Quran, and wrote: ‘How beautiful and civilised and no ‘I’. May Allah SWT guide us on to His beautiful religion.’ 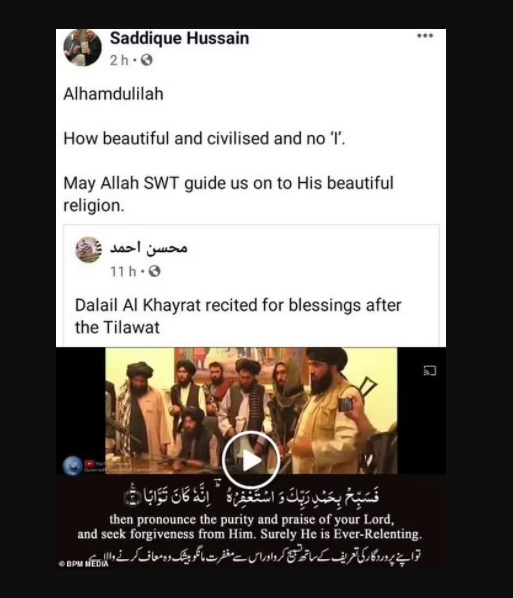 Furious worshippers, who include Afghan refugees who fled the Taliban regime 20 years ago, contacted police and mosque trustees over the post, claiming it indicated support for the Taliban regime, a claim Mr Hussain denies.

One worshipper, who has submitted a formal complaint, said: ‘There is nothing civilised about the Taliban holding guns and reading Quran.’

In his complaint, seen by Birmingham Live, he wrote: ‘He (Saddique) wrote the video is civilised and beautiful. The Taliban are civilised?

His sharing brings great harm to Pashtun people in Small Heath who have family hurt by this group, and other Birmingham citizens. His sharing is like an endorsement for their actions.

‘He said that he only shared because the Taliban were reading Quran beautifully…would he share if Boko Haram, Al-Qaeda or the ISIS read the Quran in a way that he likes?

‘Because of this I no longer want my child to study in your new madrasah because of fear that people running the education could teach children the dangerous message, which is opposite to British law.

‘I will also bring this disturbing share to the attention of Birmingham safeguarding for children.’

He added: ‘There is a refugee crisis and lots of innocent people who being affected by Taliban are trying to escape. What will happen when they come to UK and see manager of Ghamkol mosque sharing postings about those who oppress them?’

Another mosque said: ‘This is inexcusable, it comes across as supportive of the Taliban and that is absolutely disgusting.

‘I pray at the mosque alongside Pashtuns from Afghanistan who escaped their regime 20 years ago and settled here, and for them to see this while they have huge anxiety for their friends and family is appalling. This message has stirred a lot of anger.’

Another said: ‘Islam is a religion of peace, and he shares an image of men with big guns, who have just celebrated seizing control, and it suggests the mosque is supportive of their regime. It is unbelievable.’

Police confirmed they were alerted to the post and visited the mosque, where they interviewed Mr Hussain. They issued a warning and said they would be ‘monitoring the situation.’

A West Midlands Police spokesman said: ‘We were made aware on Friday, Aug 20, of Facebook posts relating to the situation in Afghanistan and the Taliban that were causing concern with some members of the public.

‘Neighbourhood officers visited the person who’d posted the messages to understand his reasons behind the post and a video he shared. No criminal offences have been identified but the man was warned and we will be monitoring the situation.’

Following the incident Mr Hussain posted an apology to his Facebook page and said while ‘the focus of the video was the recitation’ he ‘should have thought’ before he shared the post.

He wrote: ‘Earlier this week I shared on my Facebook page a post by someone else which showed a short video of a group of men sitting and standing around a desk listening to the recitation of the Qur’an followed by sending blessings on the Beloved Prophet (Peace and Blessings Be Upon Him).

‘The Arabic recitation was translated in English sub-titles. No other comments were made. The focus of the video was the recitation and I commented on that. This was ill-advised.

‘I should have thought before I shared the post. Had I done so, I would have properly appreciated that:

(2) The group included individuals who were likely to be Taliban officials.

‘After Friday prayers I was visited by the police who had an anonymous tip off that I had posted something concerning the Taliban.

‘I told them why I had shared the post, explained my comments and told them categorically that I never have supported the Taliban and regret any offence caused by my actions. Within minutes of the officers leaving I deleted the post.

‘I reaffirm that I do not support and never have supported the Taliban.

‘Like many people I pray for a positive resolution to the crisis in Afghanistan – for peace in the country and a civilised government under which the human rights of all citizens are respected.

‘Once again, by sharing the post thus causing anyone any offence or hurt whatsoever I unreservedly and sincerely apologise.’

The Board of trustees at the mosque, chaired by Ahsan ul Haq, said they were aware of the concerns raised and were investigating.

In a statement they said: ‘The board of trustees of the charity are aware of concerns raised about a post made by the mosque’s General Manager, Saddique Hussain, using his personal Facebook account. We are investigating the issue and will respond appropriately.

‘As this is an employment issue, it would not be appropriate to comment further on this incident.

‘I can assure you more generally that the charity trustees are keenly alive to community concerns about ongoing developments in Afghanistan.

‘We join our neighbours in hoping for a positive resolution to that crisis – and extend our prayers for peace.

‘We cannot know how far the new regime in Afghanistan will make good on its promises to respect women’s rights, forgive those who fought them, and ensure the country does not become a haven for terrorists.

‘We can only pray that they do, both for the benefit of the citizens of Afghanistan and because of the wider impact that developments in the region have on all of us, wherever we are in the world.

‘As a community based faith charity, our impact on international affairs is of course extremely limited.

‘We can take some comfort in the fact that our mosque community continues to work to live out our belief in Islam as a religion of peace, respecting human rights, promoting forgiveness and working to support those less fortunate than ourselves.

‘In recent months, the mosque’s focus has been to support our local communities through the impact of Covid-19.

‘We continue to develop that work and as we return to normal after the lockdown we will be resuming our charitable services, with a focus on community development and educational opportunities for some of our most disadvantaged communities.’