Emmanuel's Blog
Home Blog Queen Elizabeth ‘lawyering up’ amid fears of ‘attacks’ on Royal Family in... 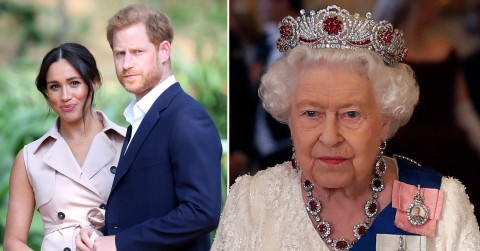 Queen Elizabeth II is reportedly consulting lawyers ahead of the publication of Prince Harry’s memoir next year.

Harry and his wife, Meghan have been outspoken in their criticism of the Royal Family since moving to the US to start a new life with their young family.

They told TV host Oprah, Winfrey that an unnamed royal, not the Queen or Prince Philip asked questions about son Archie’s skin colour before he was born.

The couple have also alleged that Meghan’s mental health struggles were downplayed and ignored by the crown.

Harry announced his tell-all book will be out next year, coinciding with the Queen’s platinum jubilee celebrations and reports now say royal aides are communicating with experts in libel and privacy cases amid fears the book by Harry could contain more damaging accusations against Buckingham Palace.

Harry has said the book will be ‘accurate and wholly truthful’ and he is writing it ‘not as the prince I was born but as the man I have become’.

According to The Sun a source says the Queen has become ‘exasperated’ with the repeated attacks and feels that ‘enough is enough.’

They said: ‘The feeling, coming right from the top, is that enough is enough.

‘There is a limit to how much will be accepted and the Queen and Royal Family can only be pushed so far.

‘They are getting lawyered up. Harry and Meghan will be made aware and know repeated attacks will not be tolerated.’

The legal fightback is said to include a potential warning being sent to the publishers of the book, Penguin Random House.

The palace may insist on advance warning of the contents of the book and a right to reply to any allegations, according to the source.

Concerns focus on the likelihood of someone being named in the book and accused of something libellous or revelations being included that infringe the rights of royals to a have a private family life.

The source added to The Sun: ‘It would be ironic if Harry and Meghan were accused of breaching privacy given their pronouncements on the subject.

‘The legal team could also contact publishers of the book to ask for advance warning of its contents and a right to reply.

‘There are concerns that the American public are falling for what Harry and Meghan say.’