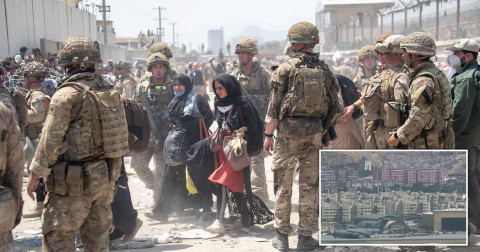 The UK says it will end its evacuation mission in Afghanistan today, August 27 citing security concerns.

The UK defence ministry says it has closed its refugee processing centre in Kabul following the terro bomb attacks that killed over 90 people in Kabul on Thursday, August 26.

The Abbey Gate of Kabul airport, the scene of a deadly explosion yesterday, was shut in the early hours of the morning.

The Baron’s hotel, which has been used as the processing centre to deal with thousands of claims from those trying to flee the new Taliban regime, has also closed.

UK defense minister, Ben Wallace said efforts to get tens of thousands of people out of the country is entering its final stages and conceded ‘the sad fact is not every single one will get out’.

Mr Wallace told Sky News on Friday , August 27: ‘We will process the people that we’ve brought with us, the 1,000 people approximately in the airfield now and we will seek a way to continue to find a few people in the crowds where we can, but overall the main processing is now closed and we have a matter of hours.’

Nearly 14,000 British nationals and Afghans have been rescued as part of the mission which began in the middle of August.

Wallace insisted Thursday’s terror attack at the airport had not hastened the UK’s departure.

‘The threat is obviously going to grow the closer we get to leaving,’ he told Sky News.

‘The narrative is always going to be certain groups, such as IS, will want to stake a claim that they have driven out the US or the UK.

‘We closed the Baron’s hotel almost exactly on schedule. The explosion was horrendous, but it didn’t hasten our departure.’