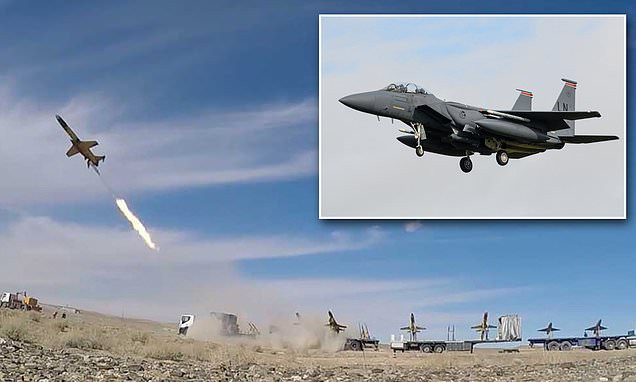 ‘Coalition aircraft successfully engaged and defeated a UAS through air to air engagement in the vicinity of Mission Support Site Green Village,’ US Army Colonel Wayne Marotto, who heads the US-led coalition against ISIS, told Reuters, using an acronym for an unmanned aircraft system.

Fox News reporter Lucas Tomlinson said an F-15E shot the ‘Iranian’ drone, which flew ‘too close’ to the 900 US troops in the area on Satuday, according to a tweet citing US officials.

Green Village is an outpost where US troops are housed in former oil industry villas next to a major Syrian oil field, according to the Washington Post.

Officials also told Aviation Week that the drone was ‘deemed a threat and self-defense measures were taken.’

The Pentagon last month said it was deeply concerned about attacks on U.S. personnel in Syria and Iraq.

Just last month, two US service members were wounded after 14 rockets hit an Iraqi airbase hosting US forces, according to Reuters.

Iraqi militia groups aligned with Iran had vowed to retaliate after US strikes on the Iraqi-Syrian border killed four of their members in June.

The latest show of force in Syria comes after US withdrawal from Afghanistan, where the terrorist Taliban have taken over most of the country.