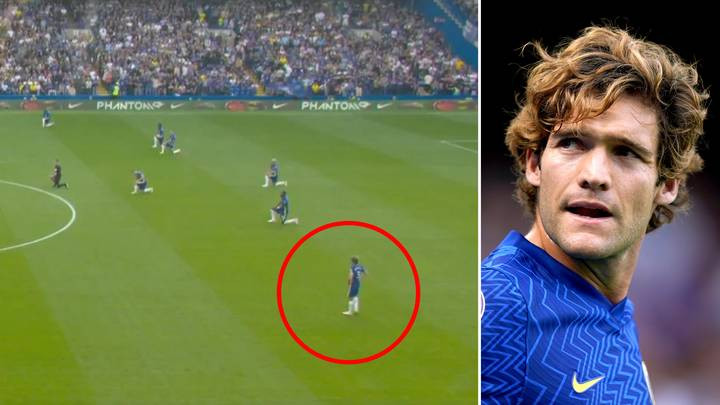 Chelsea defender, Marcos Alonso has has opined that taking the knee is “losing a bit of strength” as an anti-racism gesture, saying he will end the gesture henceforth.

Players and staff across the Premier League have been taking the knee before matches since the 2019-20 seasin in June as a way of showing solidarity towards the Black Lives Matter movement in it’s fight against racism.

But Alonso believes he has found a better way to show that he is “against every type of discrimination” saying “I prefer to put my finger to the badge”.

“I am fully against racism and I’m against every type of discrimination, and I just prefer to put my finger to the badge where it says ‘no to racism’, like they do in some other sports and football in other countries.

“And maybe I think it’s losing a bit of strength the other way, so I just prefer to do it this way and to show I am fully supportive of fighting against racism.”

Asked if he has discussed his decision with the rest of the Chelsea squad, the he replied: “No, we haven’t talked about it.

“We are in the changing room and we are like a family. I have a very good relationship with everyone, I love everyone and up to now we haven’t talked about it. I don’t think there is a need to, but, of course, if I have to speak to anyone, I will say the same thing I just told you and I don’t think there will be any problems.

“For now, I prefer to point to the sleeve and that’s what I will do.”

Remember Crystal Palace winger, Wilfred Zaha was the first man to denounce taking the knee , as he labelled the gesture “degrading”.