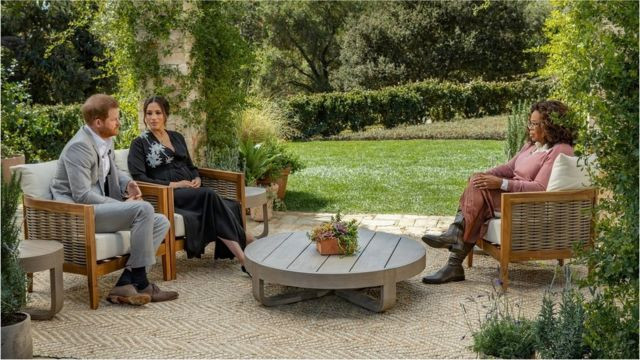 At the event which took place on Thursday night, a number of famous faces made appearances to hand out awards to the winners. During one segment, Sir Trevor McDonald introduced a clip which showed some of the biggest moments over the past 12 months. As a clip of the Duke and Duchess of Sussex’s interview with Oprah Winfrey popped up onto the screen, booing could be heard from the audience.

It was also learnt that viewers at home couldn’t hear the audience booing from their TVs. A source who spoke to MailOnline said;

‘Meghan and Harry were shown on screen during a montage of TV moments from the last twelve months.

‘Immediately, there was audible booing throughout the arena. It was as though they were pantomime villains.’

A second source, a celebrity who reportedly asked not to be identified, noted that some ‘embarrassed faces’ could be seen in the audience.

‘When the clip came up of Meghan there were boos from the audience.

‘Some shouted out and there was laughing. There were a few embarrassed faces but sadly Meghan was obviously not too popular on the night.’

Other clips that were shown included snippets from The Crown and Bridgerton. Former Good Morning Britain host Piers Morgan, who was also up for the best presenter award also got booed by the crowd.

Many viewers took to social media throughout the night to share their thoughts on the booing.

Recall that in the Duke and Duchess of Sussex’s interview with Oprah, they talked about racism in the British monarch, feeling suicidal among other things.