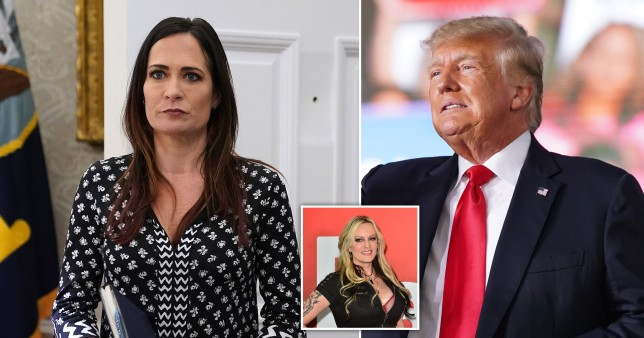 Former US president, Donald Trump allegedly called one of his ex press secretaries to defend the size and shape of his pnis.

The claim was made in an upcoming book “I’ll Take Your Questions Now: What I Saw In The White House”, which is set to be released on 5 October.

Stephanie Grisham, who served him for just under a year made the revelations in the book.

It is alleged that he called her while on Air Force One following accusations by adult film star Stormy Daniels, who allegedly had an affir with him.

Daniels wrote: ‘I lay there, annoyed that I was getting f***ed by a guy with Yeti pubes and a dik like the mushroom character in Mario Kart’.

The former president then called press secretary Stephanie Grisham to assure her that his pnis was, in fact, neither small nor bore a resemblance to a cartoon fungus.

In another instance, Grisham says Trump told her to bring an unnamed press aide on the presidential plane so that he could ‘look at her’ before using an expletive to describe her backside.

Grisham said Trump ordered her to promote the woman and ‘keep her happy’ but she instead tried to keep the woman away from him.

Grisham, whose book is due out next Tuesday, added: ‘I knew that sooner or later the president would want me to tell the public something that was not true or that would make me sound like a lunatic.’

Trump responded to Grisham’s book with a statement to The Times on Tuesday September 28.

He said that ‘Stephanie didn’t have what it takes and that was obvious from the beginning’ and she became ‘very angry and bitter’ after a breakup.

He added: ‘She had big problems and we felt that she should work out those problems for herself. Now, like everyone else, she gets paid by a radical left-leaning publisher to say bad and untrue things.’

What happened when Trump visited the Queen Elizabeth during his presidency? How were he and Melania received by the Queen?