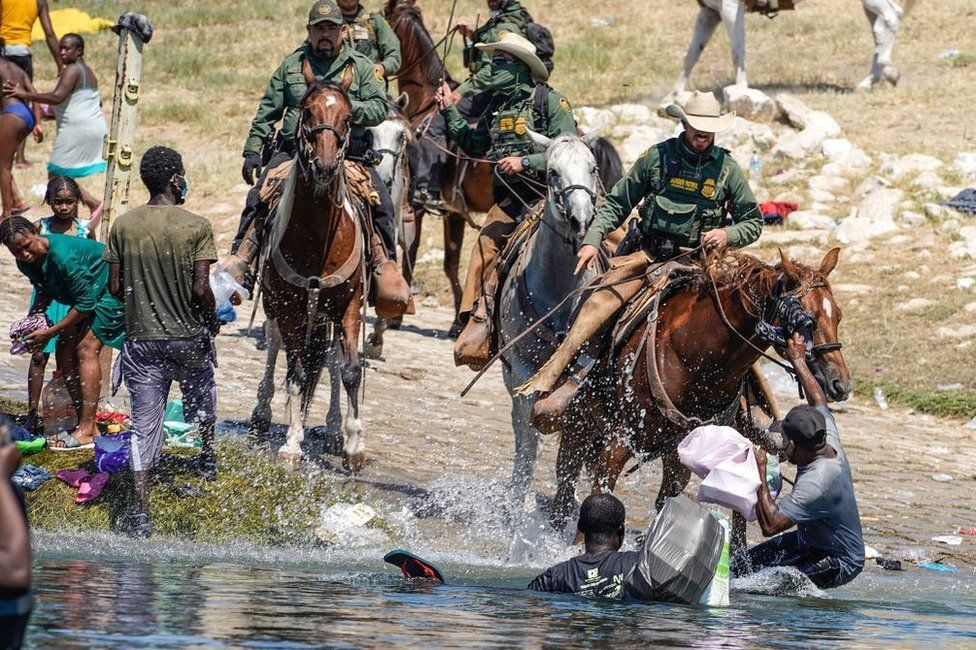 The White House has condemned use of horse reins by border patrol agents to whip and wrangle Black Haitian migrants.

A picture by photographer Paul Ratje showed the agent on horseback grabbing one of the migrants as the man tried to cross into the United States from Ciudad Acuña, Mexico, on Sunday September 19.

Ratje said many of the Haitians were crossing the river back and forth to get food for their families and were blocked by the horses. Commenting on one of the photos, he said;

“Some of the migrants started running to try to get around the horsemen, and one of the agents grabbed the Haitian in the picture by the shirt and he ended up swinging him around while the horse trotted in a circle.”

The El Paso Times reported the agent had swung his whip and charged his horse at people trying to cross, shouting, “Let’s go! Get out now! Back to Mexico!” 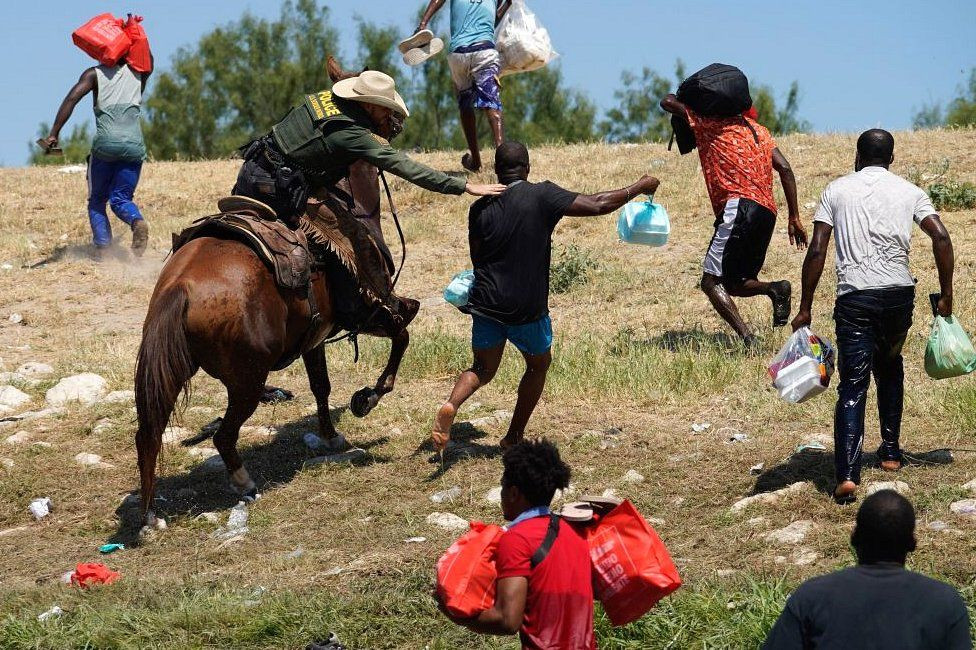 A Reuters report from the same area described a law enforcement officer using a lariat and whipping it close to the face of a migrant. It’s unclear if it was the same agent.

Pictures widely shared on social media also showed the border patrol agents using their reins against the migrants and pushing them back towards the Rio Grande in Texas.This invoked memories of slave-catching patrols chasing their human quarry (patrols that laid the foundation for modern American law enforcement) and 19th century scenes of the violence of slavery in the United States.

White House press secretary Jen Psaki described the viral photos as “horrific,” but declined to say what consequences there should be for the agent’s actions. She told reporters at the daily White House briefing;

“I have seen some of the footage. I don’t have the full context. I can’t imagine what context would make that appropriate, but I don’t have additional details.

“I don’t think anyone seeing that footage would think it’s acceptable or appropriate.”

In a statement on Monday night, the Department of Homeland Security said the agency “does not tolerate the abuse of migrants in our custody and we take these allegations very seriously.” 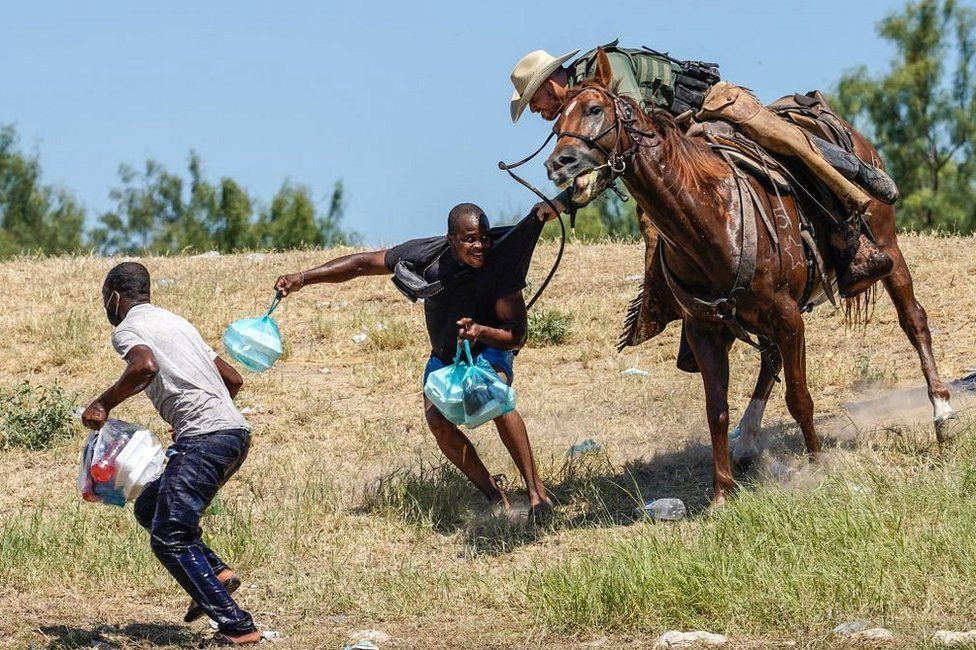 The statement also revealed that the Custom and Border Protection’s Office of Professional Responsibility “is investigating the matter and has alerted the DHS Office of Inspector General.”

When asked about the photos while visiting Del Rio, Texas, where more than 15,000 mostly Haitian migrants have converged on a border bridge, Head of Homeland Security Alejandro Mayorkas said the reporter who asked him about the whip was “assuming the facts,” and suggested it was possible the agent was simply holding a long rein.

The migrant surge has become a crisis for President Joe Biden’s administration. Speaking in Del Rio, Mayorkas said Haitian migrants were receiving fake information about being able to stay in the United States. 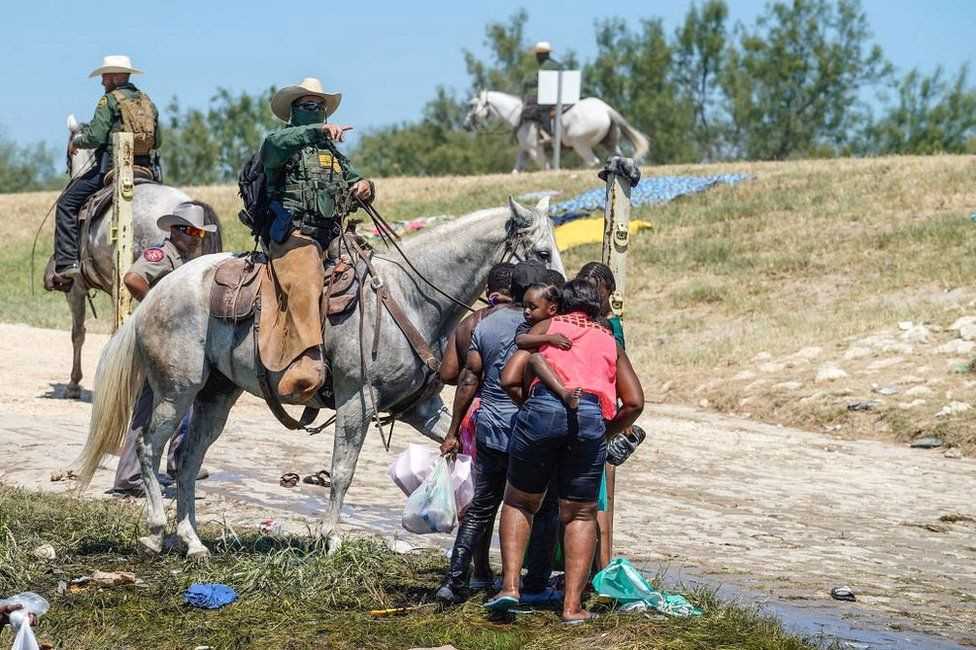 He said the government would step up repatriation flights for the Haitians, and that US authorities considered it safe to send them back.

“To ensure control of the horse, long reins are used but we are going to investigate the facts to ensure that the situation is as we understand it to be and if it’s anything different, we will respond accordingly.”

Mayorkas was also supported by Border Patrol Chief Raul Ortiz, who defended his agency’s use of horses, saying they “play an integral part in the security response.”

“We do not know who are the smugglers or who are the migrants, so it’s important that those border patrol agents maintain a level of security for both themselves and for the migrant population as they were trafficking back and forth.”

The camp under a bridge spanning the Rio Grande has become the latest flashpoint for U.S. authorities seeking to stem a flow of migrants fleeing gang violence, extreme poverty and natural disasters in their home countries.

The camp was a temporary home to more than 12,000 migrants, though Texas Governor Greg Abbott said the number reached as high as 16,000 on Saturday. Many had traveled from as far south as Chile, hoping to apply for asylum in the United States.