Emmanuel's Blog
Home Uncategorized Father trekking from one state to another on barefoot to help get... 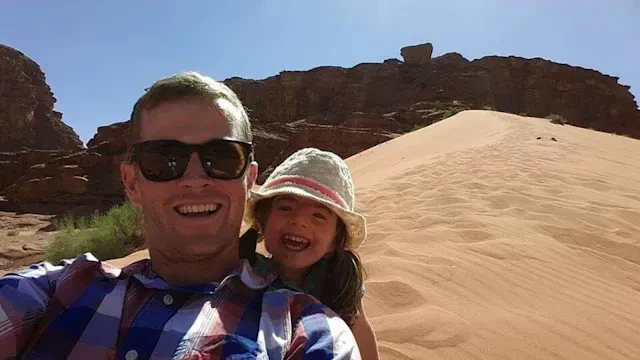 A father is going the extra mile by trekking from Maine to South Carolina to support his 9-year-old daughter Hasti, who has a rare genetic disorder called Cornelia de Lange Syndrome (CdLS).

Chris Brannigan, a 41-year-old retired British Army Major, is currently walking barefoot from Maine to North Carolina in an effort to raise money to create a gene therapy for CdLS.

“We knew as soon as Hasti was born that she had some challenges and things weren’t quite right. She had a seizure within 24 hours of being born. She wouldn’t eat willingly for the first year of her life. It took her five years before she even said a word,” he tells PEOPLE (The TV Show!).

After finally getting a diagnosis six years later, Chris and his wife Hengameh were told that there were no treatment options — an answer they “never accepted.”

“It’s really, really terrifying because for us, we have such a bright and bubbly little girl in Hasti, and she loves life. But from about age 12, all the studies show that children with CdLS have declining executive function, they have an increase in aggressive behaviors, in ADHD, in autistic spectrum disorder type behaviors, and in some cases they become mute,” he explains.

“We just don’t want that for Hasti.”

Last January, Chris and his wife founded Hope for Hasti “with the aim of creating a therapy that can treat CdLS.”

“Our hope is that while this will never cure the condition, that it can elongate our life, that it can improve her health and her health span, her cognitive ability, and hopefully someday enable her to have an independent life,” he adds.

But the dad says coming up with funding has been tough, especially during the COVID-19 pandemic.

“We need three and a half million dollars to make this a reality for kids,” he says. “So we knew we had to do something big, something really to grab people’s attention.”

Chris who revealed he did a previous walk in the United Kingdom last year says, trekking on barefoot across the United States has been “agonizing.”

“Lots of people walk and cycle, but we thought we need to do something really that will make people look twice, and we’ll hold their attention. That’s why we decided to do it barefoot. Walking’s easy, barefoot it’s so very, very hard. Just like Hasti’s journey,” he says.

In fact, Chris says that “every time I feel like I’m tired and I want to stop, and it’s painful, I just remember that being able to choose is a luxury that she doesn’t have.”

Following his 35-day trek last year, Chris was recognized with a Pride of Britain Award and even earned a social media shout out from Taylor Swift.

“I was very surprised,” he says, recalling that the singer “said she was really proud of Hasti and everything she’d gone through to try and create this treatment.”

“That really lit her up because she loves Taylor’s music,” he adds. “Hasti was really over the moon, you know? We had to watch it about a million times.”