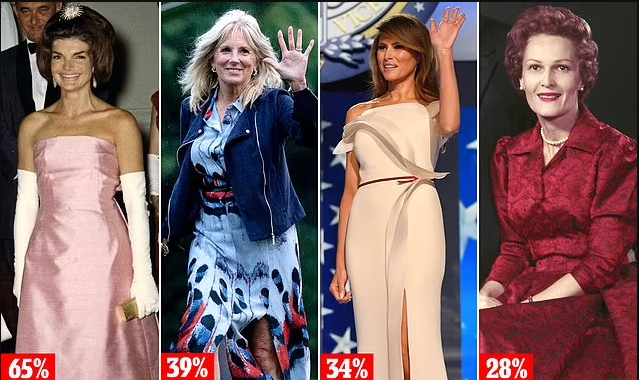 Jacqueline Kennedy has topped a new poll of America’s favorite first ladies with Michelle Obama in second place and and Melania Trump second to last above Pat Nixon.

Zogby Analytics polled a sampling of Americans for their thoughts on the past 12 women who have served as first lady.

The results were based on how many of the 5,437 likely voters said each of the First Ladies was great.

Kennedy, who became a subject of public fascination after the assassination of her husband Jack Kennedy, came in first with 65%.

The Kennedys were seen a glamorous young couple when they entered the White House in 1961 and the interest in Kennedy, who later married Aristole Onassis and became known as ‘Jackie O,’ continued to her death in 1994.

She led the nearest competition by 14 points. Coming in second was Michelle Obama at 51% with Nancy Reagan in a close third at 50%.

Kennedy, Barack Obama, and Ronald Reagan are also among some of America’s most popular former presidents.

Meanwhile, Jill Biden, the current occupant of the East Wing, came in near the middle at 39%.

Pat Nixon was at the bottom with 28%, while Melania Trump second from last at 34% and Hillary Clinton was third from the bottom at 35%.

Nixon’s husband Richard Nixon resigned rather than face impeachment from the Watergate scandal.

Trump was married to Donald Trump, who refused to concede to Joe Biden’s victory in the 2020 election. Melania Trump also was one of the most quiet first ladies in recent history, holding few public events.

Clinton was a controversial first lady in her own right when she took on the role of health care and acted as an adviser to her husband, Bill Clinton. 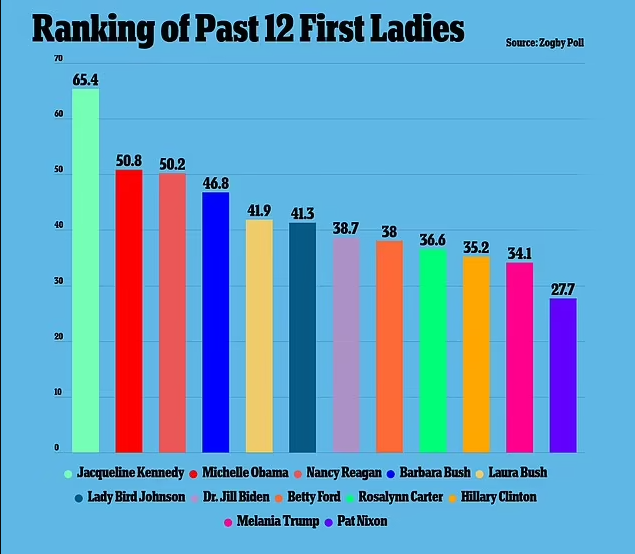