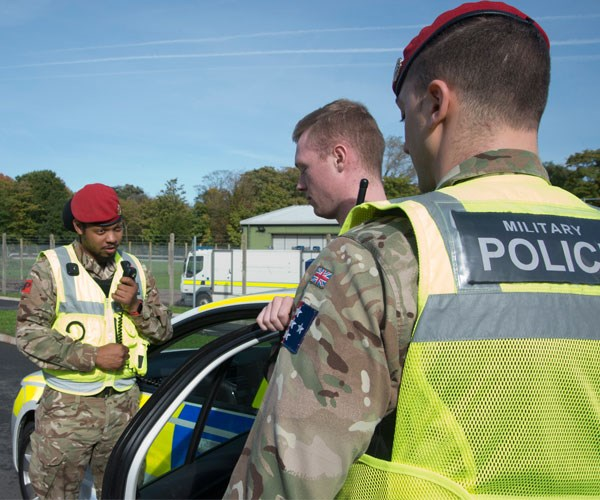 A Royal Military Police officer has been convicted of sexually assaulting a female soldier and threatening to sell naked photographs she had previously sent him.

Lance Corporal Blake Hewer sent the woman a message saying ‘nudes for sale’ with two laughing face emojis and another saying ‘there are photos on my Snapchat’.

The female soldier told a court martial she was ‘scared’ by the threatening texts as LCpl Hewer was trying to ‘control her’ and force her to speak with him as she attempted to avoid contact.

As well as threatening to distribute photos she had previously sent him, he also sexually assaulted her by groping her over her jeans while the pair were watching TV.

LCpl Hewer, of 3 Royal Military Police 158 Provost company, had denied sexual assault, claiming he simply kissed her on the cheek to reassure her as she was ill.

But he was found guilty of sexual assault and threatening to sell her nude photos when he sent the ‘there are photos on my Snapchat’ message after previously pleading guilty to sending a text with intent to cause distress in relation to the ‘nudes for sale’ message.

He is set to be sentenced on November 18.

‘The text was a threatening message in relation to him selling nude photos he had of her.

‘[He sent another text] saying ‘ngl (not going to lie) there are photos on my Snapchat.’

‘That is another threat to suggest he is going to sell or distribute nude photos of her if she does not do what he wants her to do.’

The woman had previously sent him nude photos, the court heard.

Mr Coombes said the female soldier was unwell when LCpl Hewer groped her and this incident took place within three months of one of his threatening text messages.

Mr Coombes said: ‘They were both sat on the sofa watching TV and she will say LCpl Hewer tried to kiss her but she moved her face away, not expecting it.

‘She then froze as LCpl Hewer kept trying to kiss her and she turned her head away. He moved his hand towards her vagina and rubbed it with his hand on her jeans.’

The woman told the court: ‘He started to try and kiss me. I was not kissing him back and I do not know how he did not get that I did not want to do it.

‘I said “no” after a bit as it took time to clock what was going on.

‘Then he got funny about the fact I was telling him to get off me. Then he went after that when I told him to get out.’

The woman said LCpl Hewer, who was based at Bulford Camp, Wilts, was sending her the threatening messages in a bid to control her and get her to speak to him again as she was avoiding talking to him.

She said: ‘[I thought] he was just saying [about the nudes] to scare me. That was his way of getting control of me because I could not do anything.

‘He was using [the photos] against me. It scared me because if I did not do what he says and keep speaking to him he may do something and I did not want to risk that.

‘He knows people I work with. How embarrassing is that and it is scary.’