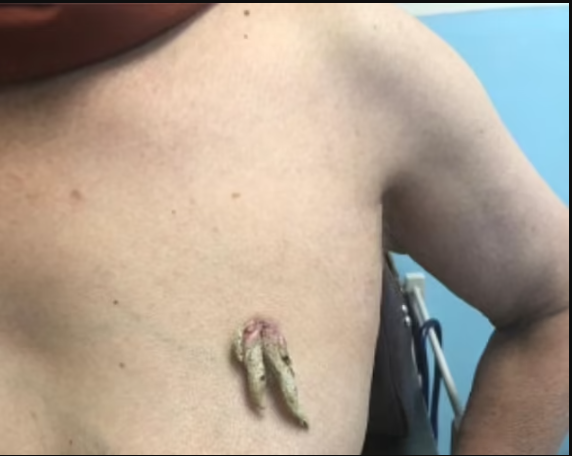 A Malaysian woman developed ‘ram’s horns’ on one of her breasts after an ‘extremely rare’ case of viral warts.

The 63-year-old told doctors she first noticed the growths on the left side of her chest two years ago. But by the time she went to the hospital they had grown to around 5cm (2inch) in length and had become itchy.

The woman was told she had cutaneous horns (CH), which occur due to a build-up of keratin, a protein in hair, skin, and nails.

Doctors believe the horns formed as the result of a skin infection after tests ruled out cancer. But exactly how is ‘still a mystery’.

Doctors at the Hospital Queen Elizabeth 2 in Kota Kinabalu surgically removed the horns and the patient made a full recovery.

The tale was revealed in a case report published in the journal the Annals of Medicine and Surgery.

Writing in the report, the medics said: ‘Cutaneous horns usually appear as elongated projections ranging from a couple of millimetres to centimetres.

‘It could also be described as a ram’s horn. It gradually grows over the years.’

The Malaysian woman went to the hospital complaining of the horn-like growths that caused her ‘on and off itchiness’.

Scans revealed the masses had formed on the surface of the skin and had not spread to the breast tissue itself.

Doctors performed a bedside excision to remove the horns and sent off samples to be tested for the disease which came back negative.

The patient did not have warts on any other part of her body and was not suffering from other skin conditions.

Writing in her case report, published on April 8, the medics said: ‘As of this writing she is in good health and shows no signs of recurrence.’

‘Her scar from the biopsy is well healed and does not show any signs of recurrence after follow up for six months.’

According to the reports, the causes are not clear but scientists have previously found links to radiation and UV exposure.