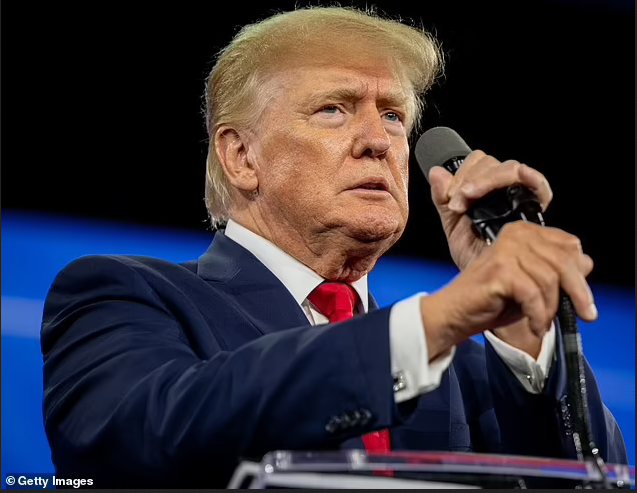 Donald Trump has dropped a major hint about a potential 2024 presidential bid while blasting President Joe Biden’s withdrawal from Afghanistan.

The former president told fellow Republicans ‘the time is coming’ for him to make a formal announcement about his next bid for the White House.

Trump said he believes ‘people are going to be very happy’ with his decision while noting that America has ‘lost everything’ under Biden’s leadership.

The Republican also confirmed during his address at the Conservative Political Action Conference (CPAC) in Dallas, Texas last week, that he will be making his plans to run for office public in the near future.

‘It’s certainly not a very long period, the time is coming,’ Trump said Saturday when Fox News asked when Republicans could expect a formal announcement.

‘I think people are going to be very happy, our country has never been in a position like this, we’ve lost everything.’

He argued the nation was facing both domestic and foreign policy crises, stating America lost its ‘prestige’ when Biden withdrew US troops from Afghanistan last year.

‘Our country has never been at a worse point,’ Trump said.

‘They gave away $85 billion worth of equipment, dead soldiers, you still have Americans over there probably as hostages, eventually will be hostages, there has never been a time like this.’

He also claimed the US is a ‘nation that allowed Russia to devastate a country, Ukraine, killing hundreds of thousands of people, and it will only get worse.

‘Trump complained that Biden turned ‘the safest border in US history by far’ into ‘the worst border ever in history.’

‘Just last month, an illegal alien here in Texas was indicted for the cold blooded murders of four elderly women throughout the state. And he’s been linked to the deaths of at least 24 people,’ he said.

‘What we do in the next few months and the next few years will determine whether American civilization will collapse and fail or whether it will thrive, frankly like never before.’

He added: ‘We’ll be making an announcement in the not too distant future.’

Trump also commented on the 2020 election, which he continues to maintain was ‘rigged and stolen.’

‘The election was rigged and stolen, and now our country is being systematically destroyed. And everybody knows it. … I ran twice and won twice,’ he declared.

‘America is on the edge of an abyss. And our movement is the only force on Earth that can save it. We have to seize this opportunity to deal with the radical left socialists and fascists.’

His remarks came shortly after the CPAC unveiled a poll showing the former president as an ‘overwhelming favorite’ for the 2024 Republican nomination.

Trump captured nearly 70 percent of the ballots cast at the conference. DeSantis was a distant second at 23.7 percent.