Emmanuel's Blog
Home Uncategorized “A crime has been committed against Ukraine, and we demand punishment” –... 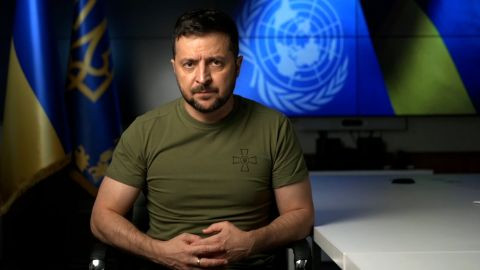 Ukrainian president, Volodymyr Zelensky has asked world leaders to unite against Russia’s war in Ukraine and strip Moscow of its veto power on the UN Security Council.

In a prerecorded message to the United Nations on Wednesday September 21, Zelensky echoed assessments made by several world leaders on the same stage including US President Joe Biden.

“A crime has been committed against Ukraine, and we demand punishment,” Zelensky said, wearing his now-customary khaki cloth.

Russia’s invasion of a fellow member state had upturned the world order, he said.

“So long as the aggressor is party to decision making in the international organization, you must be insulated from them, at least until aggression stops,” he added.

“Reject the right to vote. Deprive delegation rights. Remove the right of veto – if it is a member of the UN Security Council.”

Zelensky described Putin as an increasingly lonely figure on the world stage.

‘Russia is afraid of negotiations’

“Ukraine wants peace, Europe wants peace, the world wants peace, and we have seen who is the only one who wants war. There is only one entity among all UN member states, who would say now, if he could interrupt my speech that he’s happy with this war,” Zelensky said.

His speech was met with a standing ovation from scattered delegates in the hall in New York.

In his speech, Zelensky slammed the idea of “neutrality” toward the conflict between Russia and Ukraine, warning that indifference itself is what creates the conditions for war.

“Those who speak of neutrality, when human values and peace are under attack, mean something else. They talk about indifference – everyone for themselves,” he said.

Zelensky also claimed that previous attempts to negotiate with the Kremlin had failed, saying that there were “88 rounds of talks in various formats” in an attempt to prevent Russia’s invasion before it began in February 24.

Zelensky repeated his previous calls for friendly countries to support Ukraine’s fight with military aid, and also described a “peace formula” of five conditions, including punishment for Russia, such as sanctions and diplomatic isolation; restoration of Ukraine’s territory; security guarantees; and “protection of life.”

“For us, this is a war for life. That is why we need defense support – weapons, military equipment and shells. Offensive weapons, a long-range one is enough to liberate our land, and defensive systems, above all, air defense. And we need financial support – to keep internal stability and fulfill social obligations to our people,” Zelensky said.

The last condition for peace, he added, would be “determination” – from Ukraine and from the world.

He also predicted that Russia intended to use the winter to prepare its forces for a renewed assault on Ukraine.

Putin earlier on Wednesday announced the “partial mobilization” of 300,000 Russian citizens to support the invasion, and raised the possibility of using nuclear weapons.