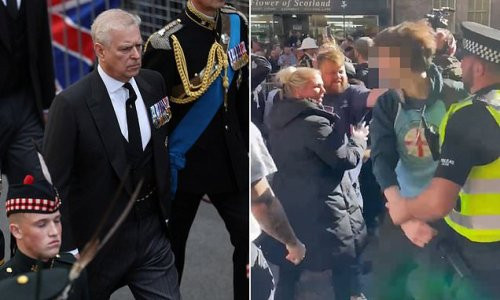 Police in Scotland have confirmed a 22-year-old man has been charged with breaching the peace after the spectator heckled the Duke of York as he marched with King Charles III behind the Queen’s coffin in Edinburgh on Monday, September 12.

The man was filmed shouting at Prince Andrew as his mother’s hearse slowly made its way up the Royal Mile in Scotland’s capital to St Giles’ Cathedral, where the late monarch is lying in state.

Footage then showed the heckler being shoved to the ground by angry mourners before he was helped up and pulled away by police officers, as those grieving the late Queen continued to push him. He was then dragged away from the road he yelled ‘disgusting’ and ‘I’ve done nothing wrong’.

In Edinburgh on Sunday, a woman, 22, who had been seen holding a sign that said ‘F**k imperialism, abolish monarchy’ during the accession proclamation for the King was charged in connection with a breach of the peace and will appear at Edinburgh Sheriff Court at a later date.

Meanwhile, in Oxford, a 45-year-old man was arrested on suspicion of ‘disorderly behaviour’ after shouting ‘Who elected him?’ as Charles was proclaimed King. He was later de-arrested, Thames Valley Police said.

And in London, a woman holding a sign bearing the message ‘Not my King’ outside the Palace of Westminster on Monday appeared to be moved on by police before the arrival of King Charles III.

A Police Scotland spokesperson said: ‘A 22-year old man was arrested and charged in connection with a breach of the peace on the Royal Mile around 2.50pm on Monday, 12 September 2022.

‘He was released on an undertaking to appear at Edinburgh Sheriff Court at a later date and a report will be sent to the Procurator Fiscal.’

Andrew, a Falklands War veteran who was exiled from public life amid the fallout from his role in the Jeffrey Epstein scandal, was not allowed to wear military dress for the occasion and instead wore a morning suit.

The prince will have to appear in civilian clothes at all the other public events to mourn his mother, although an exception will reportedly be made as a special mark of respect for the Queen at the final vigil in Westminster Hall.