Emmanuel's Blog
Home Lifestyle Astrology What Each Sign Will Do When They Are Not Having Good Time... 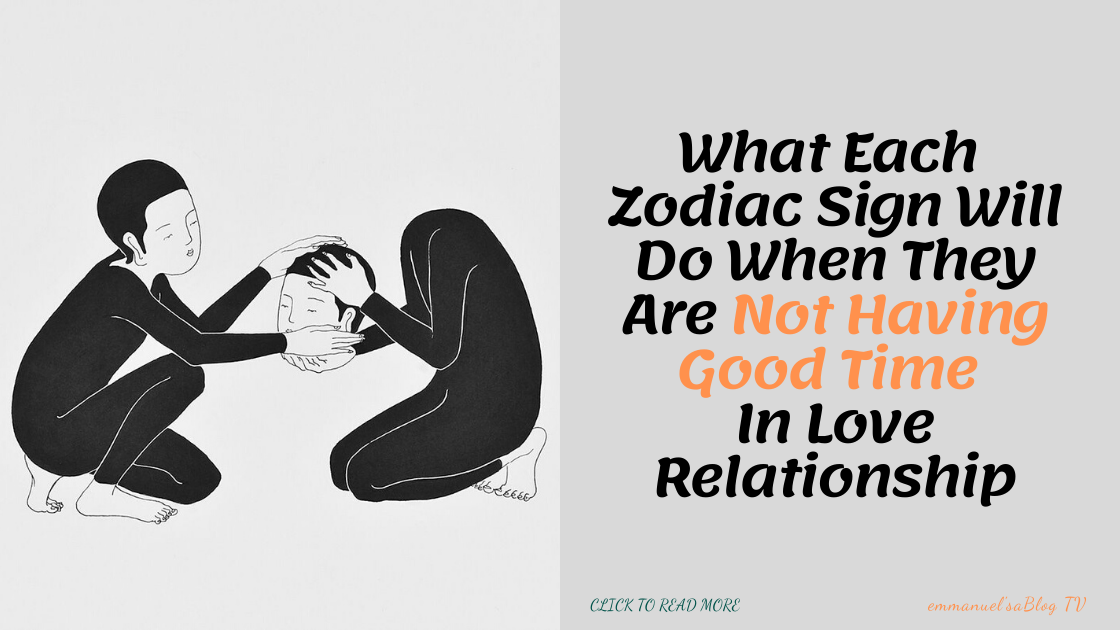 Things will happen in a relationship- good and bad. But as a partner of each zodiac signs, how can you know when your lover is having difficult times in relationship without saying it out to you.

Would you be observant to hear the cries of their heart without them opening their mouth?

This post makes it possible for you to salvage your drowning relationship and end up making it worthwhile for your partner.

This is how your partner will act when s-he is not happy with how things is going in that love relationship:

Aries will be cold and extremely reserved to you- they hold back their thoughts and would avoid discussions with you. Start one and you will see their reluctance to have a say. This should be a worrying sign to Aries partner that all is not well, even if Aries says otherwise.

They deal with themselves by focusing all attention to themselves, they become more social and relate more with people, they will spend high to catch fun and let people know. All this is as a result of the emotional space they are trying to fill- making themselves happy. 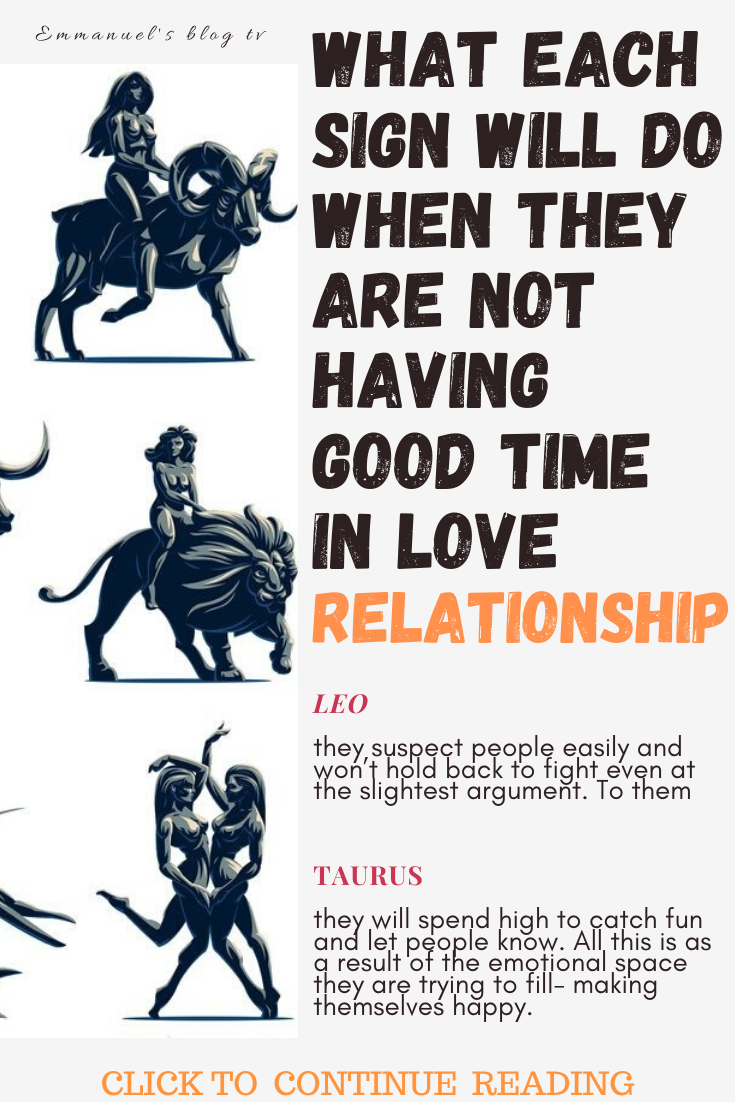 If Gemini is not functioning well in a relationship, all things related to her suffer as well. Observant close friends will notice this, because of nothing longer works for Gemini again, they will practically become and appear weak, even in other matters of life.

Cancers commit more errors when their relationship is giving them a bad ride, mistakes are made as a result of attempting to tie the loosed knots, and they become tensed and angry.

They have it tough on other people, everybody is likely to suffer from what is happening to Leo in their relationship, they suspect people easily and won’t hold back to fight even at the slightest argument. To them, this is the way to let out their frustrations, they pick easily on anyone. 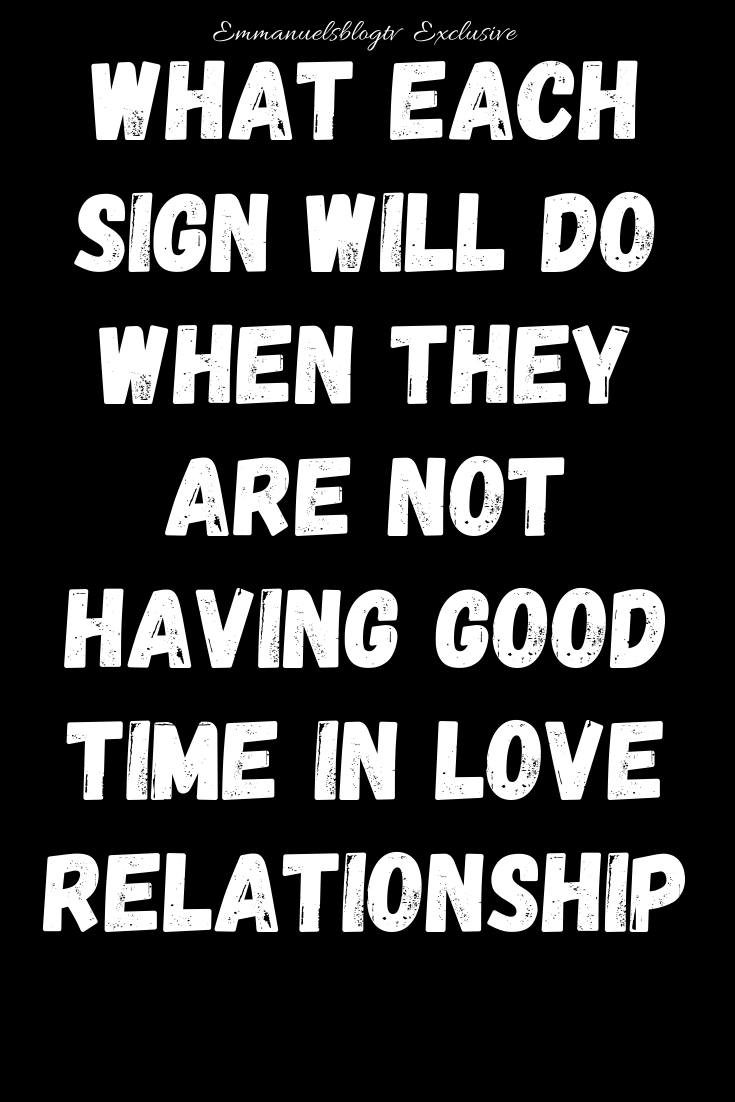 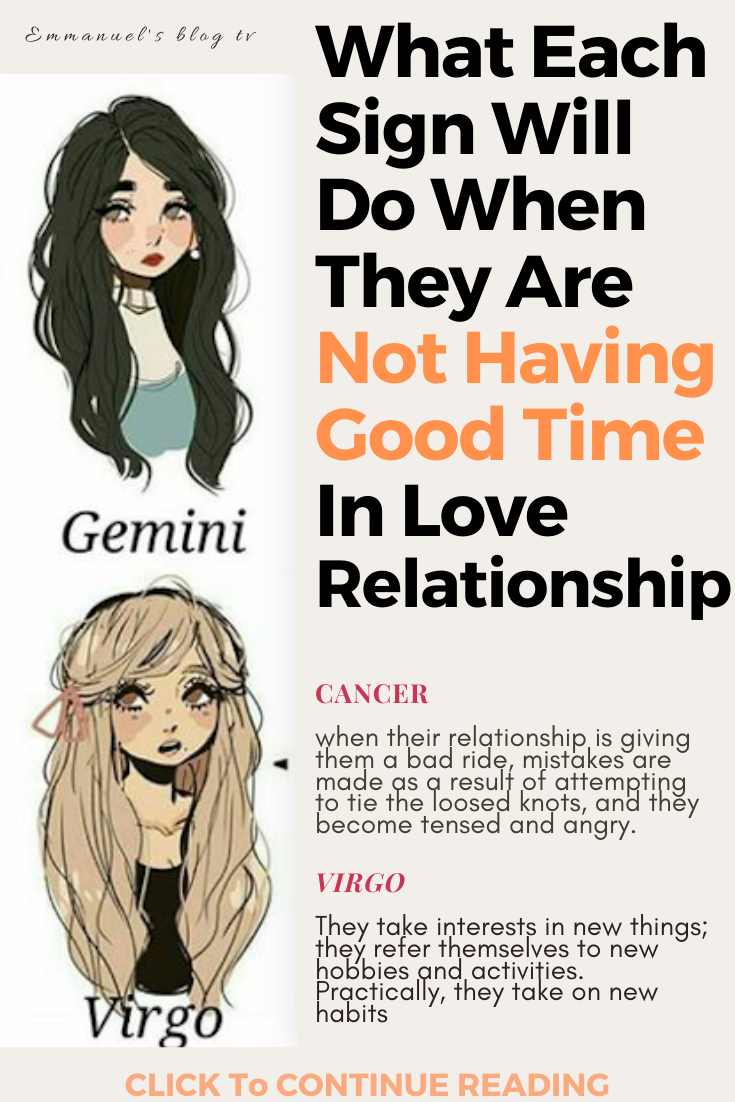 They take interests in new things; they refer themselves to new hobbies and activities. Practically, they take on new habits, all this will happen as a result of the hard time their relationship poses to them.

The anger and pain the relationship is causing them at that particular time will be inferred on what they do, they would work like work masters/mistresses, just not to lose concentration and focus. However, they end up losing themselves in their works and other engagements. They now do things over time (more than the required time). If this is observed, then Libra is not having it fine in a relationship at that particular time.

Their persistence and level of intensity will diminish, emotionally they become weak. They will lose interest in what they are doing easily, which is very unlike them as Scorpio is known to pursue things with all intensity until they have the last laugh.

They take after Leo here, they will be offended by little things, and would always see them fuming with anger and bad languages. They become so harsh to the amazement of people around them.

This is Sagittarius in a bad time in a relationship.

Things irritate them if they can’t salvage the relationship that is riding in bad luck, emotional shift (mood swing) would happen to them repeatedly, and they keep losing concentration even in the midst of a discussion.

Out of nowhere, they will launch self-defence and start defending themselves ferociously, they become greedy and would protect their interests. This is as a result of the sorrow their bad relationship is giving them.

Pisces will seek happiness in other new discoveries (activities), rather than identifying with the failing relationship. 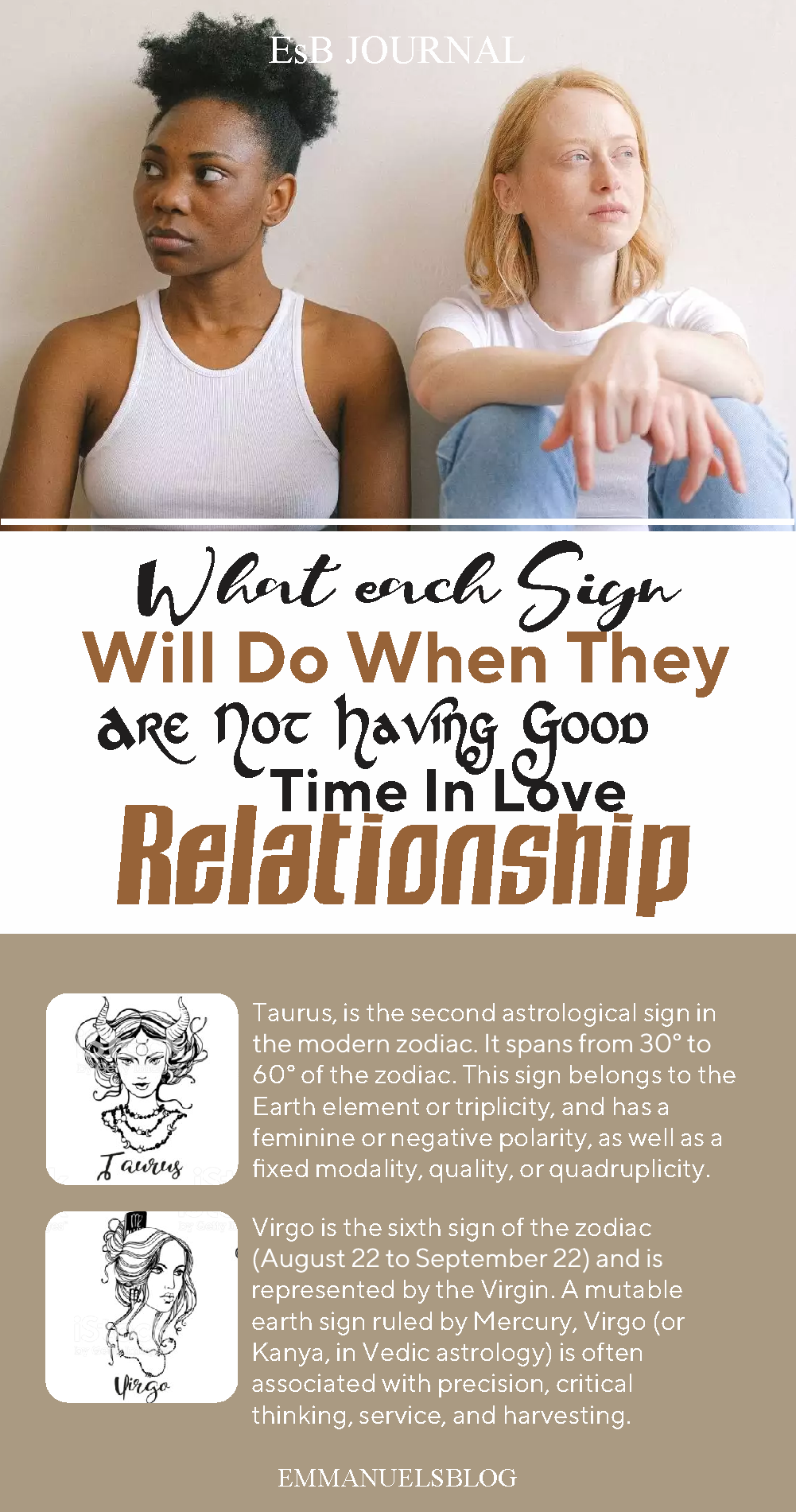 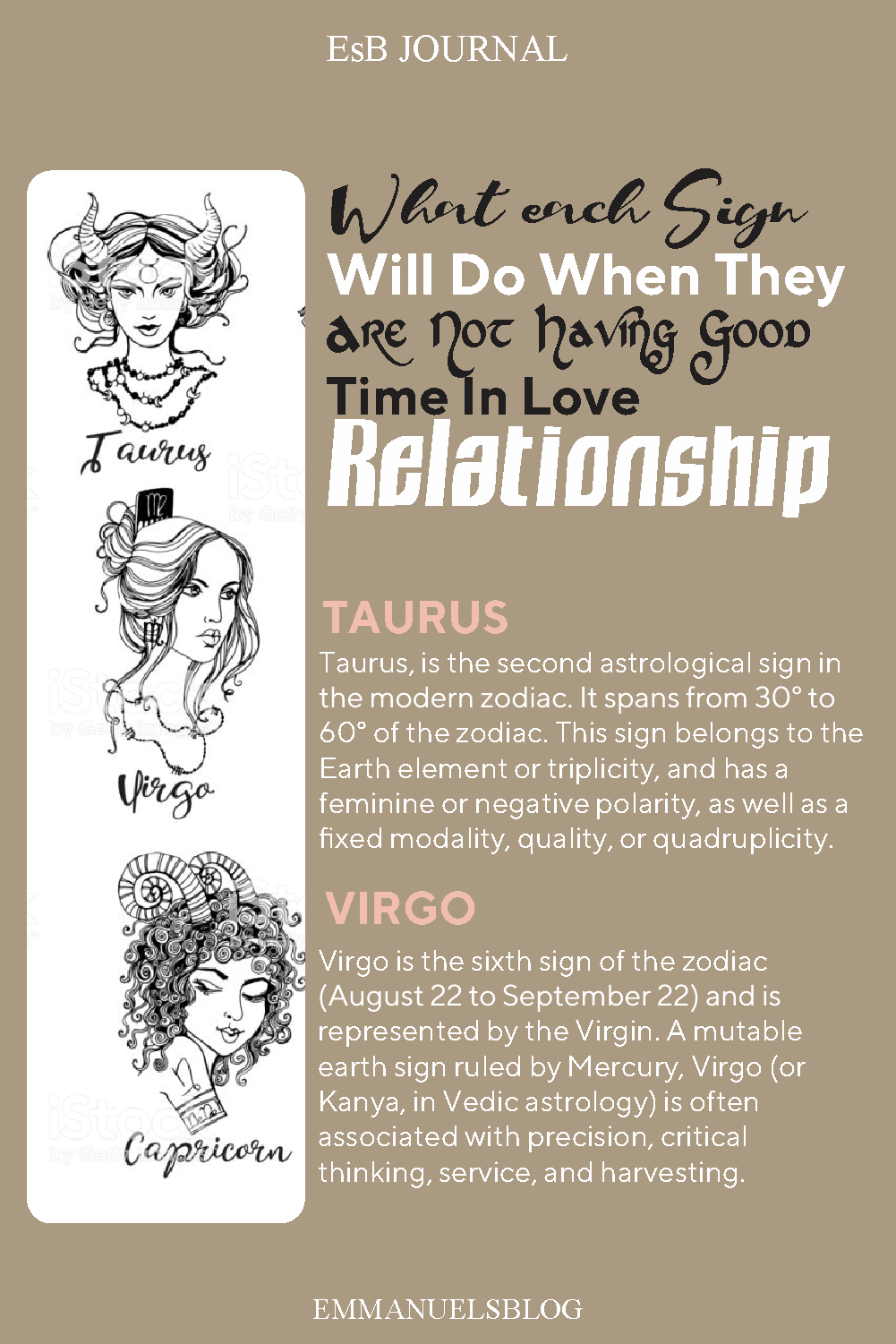