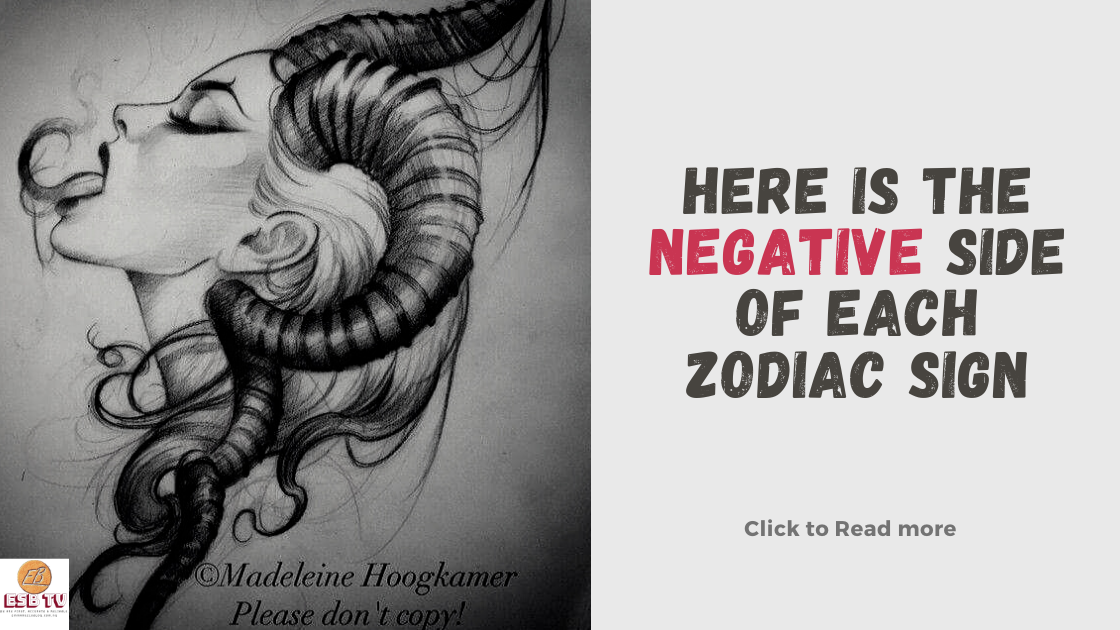 We have always had the belief and the impression that it is our zodiac sign that makes us behave the way we do.

While this is true, we may have not considered the possibility of us having negative attributes and behaviours as a result of the direct influence of our zodiac sign.

Below are the negative signs of each zodiac sign.

The Aries has always been known to be stubborn and ambitious. However, this is not even a negative sign associated with this sign. Due to the stubborn nature of the Aries, the can also be temperamental when they don’t get their way.

Their ambitious nature will drive them into living an over-achieving lifestyle. They also show signs of immaturity and jealousy, with the penchant for being impulsive.

Unlike most people believe, the Taurus is shy. But they need the motivation to be able to do something worthwhile for themselves. Without the proper motivation, they can be irrational and prone to mistakes by dwelling on weak ideas.

They also have the ability to become way too materialistic if unchecked. They tend to be possessive of people and things and they can also be lazy. 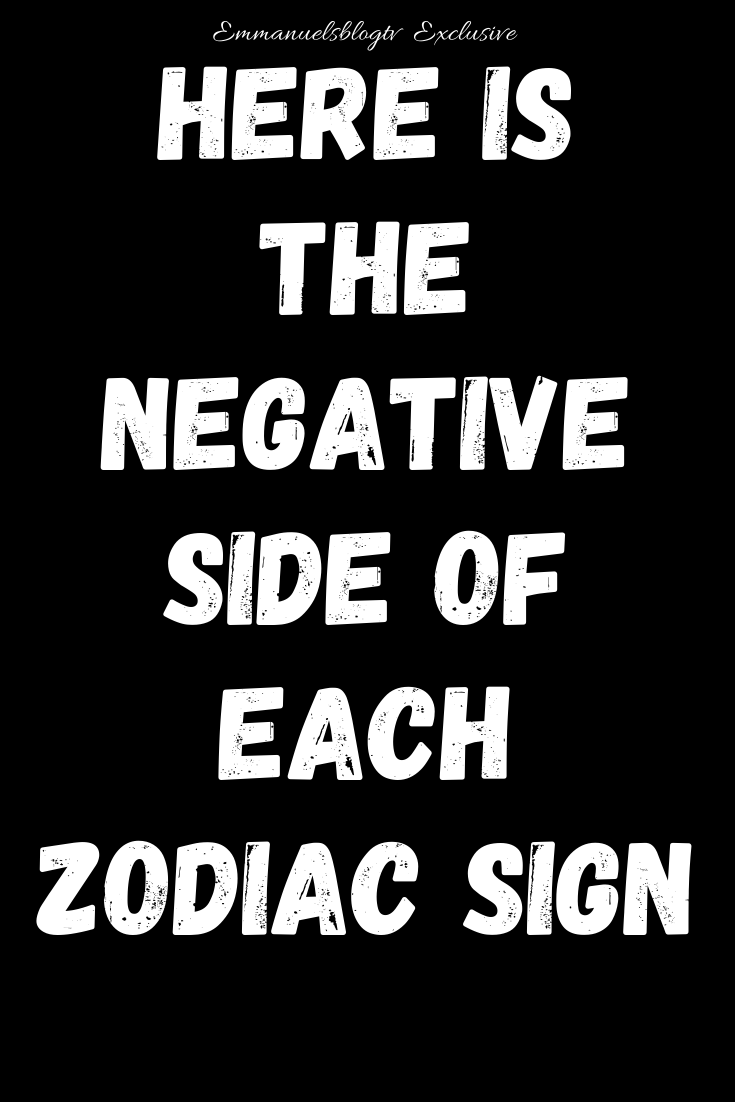 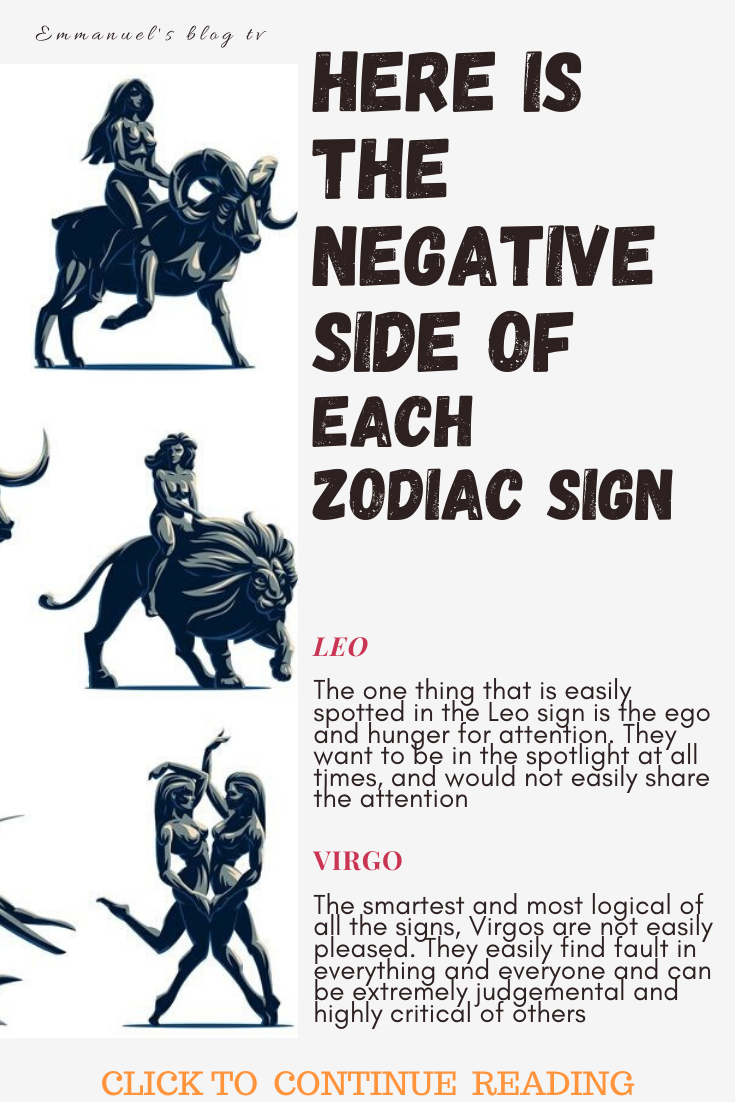 This is the only sign with two representatives; the twins. Because of this, people born under this sign are more likely to develop dual personalities. They pay too much attention to so many things at the same time, that in the end, they may not cover it all. They find it difficult to focus on one thing at a time.

Cancers are way too emotional and sensitive for their own good. They are more than happy living their lives in solitude. They do not associate much with people, and only let a few people into their inner circle.

They can vary dependent and clingy to the ones they let in or trust. Due to this, it is very easy for them to fall into depression and sadness.

The one thing that is easily spotted in the Leo sign is the ego and hunger for attention. They want to be in the spotlight at all times, and would not easily share the attention with anyone, even their loved ones. They have the tendency to become narcissists and do not react well to criticism from people. 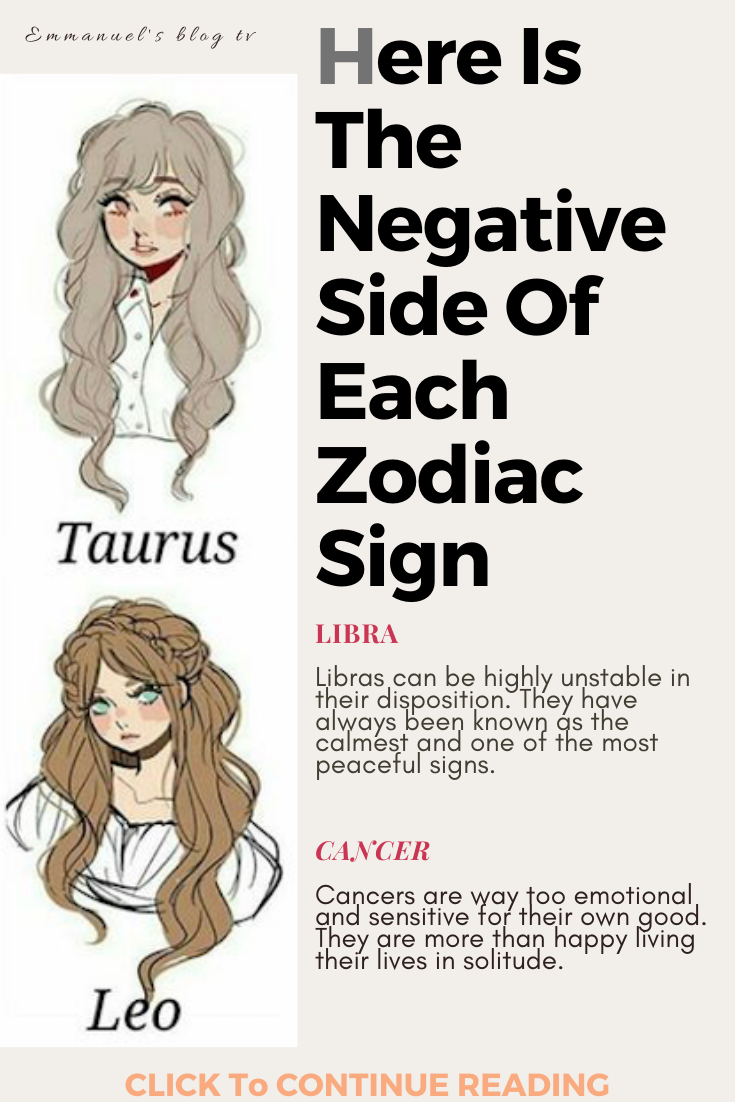 The smartest and most logical of all the signs, Virgos are not easily pleased. They easily find fault in everything and everyone and can be extremely judgemental and highly critical of others. They prefer to dwell with what they know, even if it is outdated, and would rather remain that way than learn something new.

Libras can be highly unstable in their disposition. They have always been known as the calmest and one of the most peaceful signs. However, they can be extremely manipulative to get what they want.

Their unstable nature makes it easy for them to transit from calm to irrational in a split second. They also have a tendency to betray the ones they care about.

Scorpions have always been known to be cold and distant. This is it the worst of their negative sides. Scorpios don’t attach easily, but when they do, they can become extremely jealous and distrustful. They love being in charge and can be domineering.

When they have a target, they make it an obsession. Even worse, they hardly forget wrongs done against them.

Flighty Sagittarius has quite a number of negative sides, among which are the tendency to be judgemental, especially when it comes to looks and physical appearance.

They find it hard to commit to something or someone as they see things and people as just passing fancies. They act like they know it all, but in the end, they are all words and no action.

Capricorns are extreme perfectionists. To them, things are either right or wrong. There is no room for third options to these people. They can be either focused on achieving something or not.

They take their time to make decisions and leave no room for spontaneous acts. Finally, they place so much importance on material possessions, and would rather die that part with them.

Aquarius has a calm exterior that people are uses to, however, beneath those calm exterior are temperamental attitudes that can be devastating to them and others around them. Aquarius have stubborn, rebellious and impulsive tendencies. However, they unleash them at unexpected times.

Pisces constantly feel they are up against the world, hence their tendency to create their own world of acceptance through daydreams and imaginations.

They don like to make trouble and as a result of this, they can be easily manipulated into doing something they would not ordinarily do.

The can also be lazy and can also have low self-esteem issues, causing them to further retreat into their world of clouds. 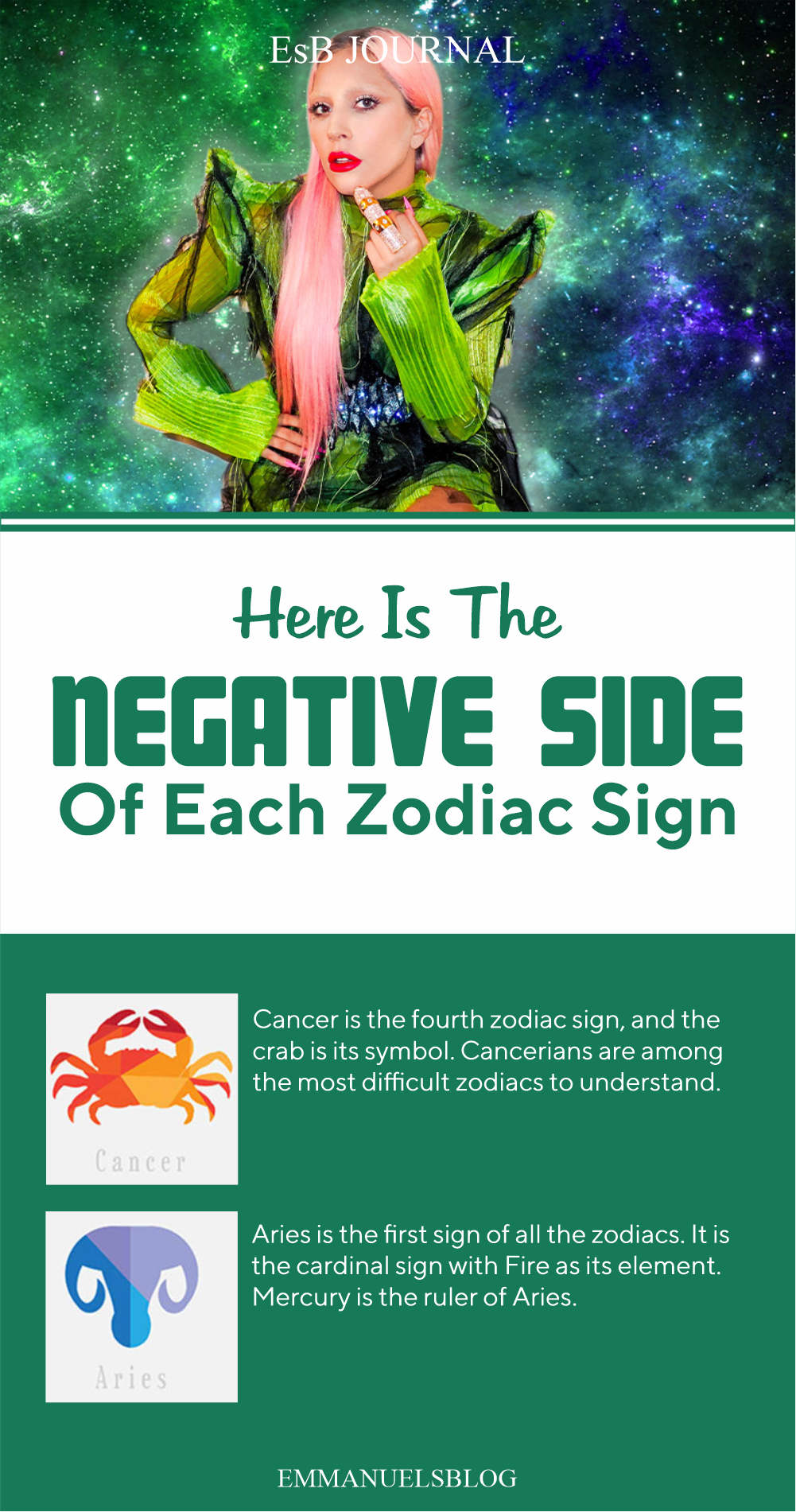 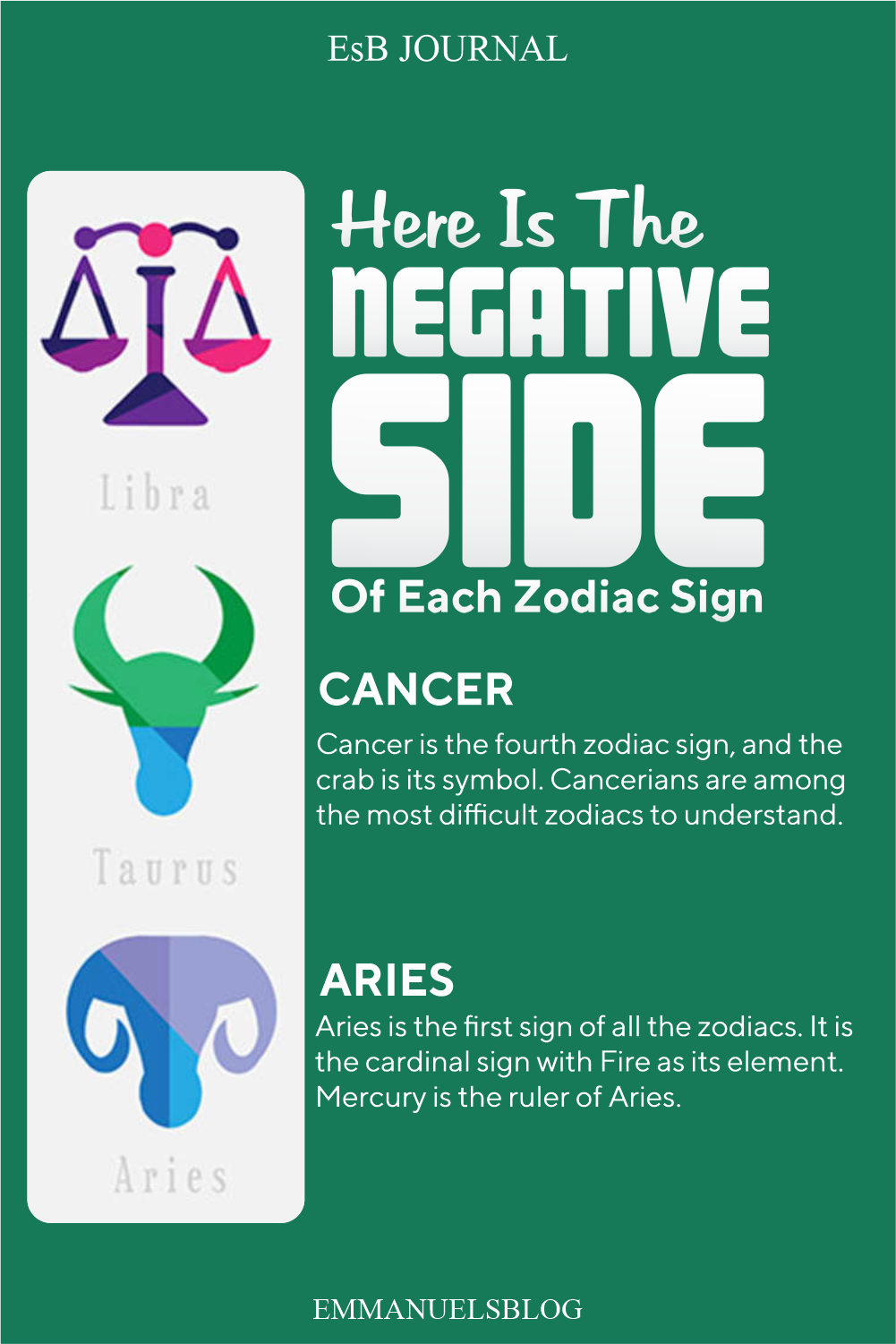