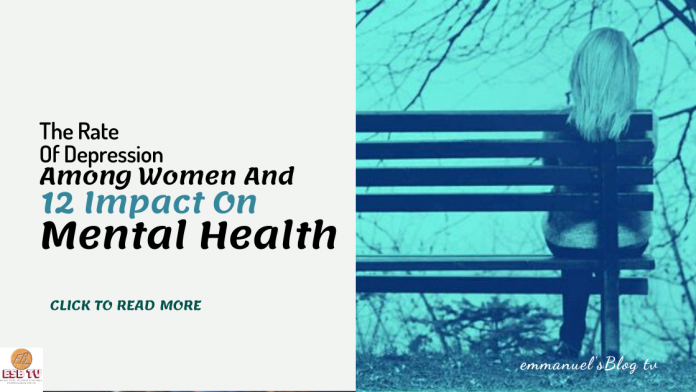 Being sad is a normal reaction to difficult times in life. But usually, the sadness goes away with a little time. Depression is different—it is a medical condition that may cause severe symptoms that can affect how you feel, think, and handle daily activities like sleeping, eating, or working. Depression is more common among women than men, likely due to certain biological, hormonal, and social factors that are unique to women.

The differences in socioeconomic factors, including abuse, education and income, may impact the higher rate of depression in women. The prevalence of major depression is higher in women than in men; in 2010 its global annual prevalence was 5.5% and 3.2%, respectively, representing a 1.7-fold greater incidence in women.

The finding of similar female:

Male prevalence ratios in developed countries and globally suggests that the differential risk may primarily stem from biological sex differences and depend less on race, culture, diet, education and numerous other potentially confounding social and economic factors.

There is no clear evidence that the rate of depression is greater in countries where women have markedly lower socioeconomic status than men than in countries where there may be more equal footing. Depression is more prevalent in young women than men (usually in the range of 14–25 years), but this ratio decreases with age. Indeed, starting at puberty, young women are at the greatest risk for major depression and mental disorders globally.

Importantly, before puberty, girls and boys have similar rates of depression; the rate is perhaps even higher for boys. At ages older than 65 years, both men and women show a decline in depression rates, and the prevalence becomes similar between them.

Women also experience specific forms of depression-related illness, including premenstrual dysphoric disorder, postpartum depression and postmenopausal depression and anxiety that are associated with changes in ovarian hormones and could contribute to the increased prevalence in women.

The fact that increased prevalence of depression correlates with hormonal changes in women, particularly during puberty, prior to menstruation, following pregnancy and at perimenopause, suggests that female hormonal fluctuations may be a trigger for depression.

Depression has not come without its influences- its effects is both physical and mental. Let’s consider the mental effects of depression. Read page 2 for more details

Seventh child dies of Strep A: Families and doctors are told to be wary of symptoms as tragedy strikes again