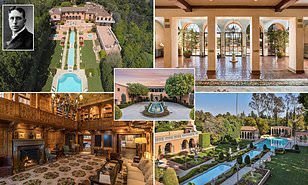 The 18 bedroom house is three blocks away from Sunset Boulevard and boasts an Olympic-size swimming pool, tennis court, cinemas and colossal terraces for hosting more than 400 guests. Built in 1927, it was the home of Hearst and his mistress, actress Marion Davies, from 1947 to 1976 and is famed for iconic scenes in The Godfather (Khartoum) and The Bodyguard.

In addition, the three-and-a-half acre lot was the former honeymoon getaway of Jacqueline and John F. Kennedy, and also served as JFK’s Presidential election HQ. Hearst developed the country’s largest newspaper and media company, Hearst Communications, and his methods of ‘yellow journalism’ were highly influential on the country’s popular news, emphasizing sensationalism and human interest articles.

He had some 30 papers across the country at the height of his powers and even claimed his persuasive editorial stance had brought the US into the 1898 war against Spain. His life story was the main inspiration for Charles Foster Kane, the eponymous character in Orson Welle’s acclaimed ‘Citizen Kane’ movie (1941).

The mansion is described by the estate agent, The Agency, as ‘an emblem of Hollywood’s Golden Era.’ The Beverly House was designed by Gordon Kaufmann, the renowned architect behind the Hoover Dam, and other homes in Beverly Hills. It has an H-form, with long colonnades, wide balconies and arched floor-to-ceiling windows provide a luxurious spaciousness. The mansion’s stunning two-story library is decorated with hand-carved wood paneling and a wraparound walkway; and the living room’s 22ft arched ceiling is hand-painted.

There is a state-of-the-art spa; a billiards room with herringbone parquet floors and an ornate ceiling and carved fireplace, both from the Hearst Castle in San Simeon. The grand upstairs hallway is more than 102ft long and features a Dennis Abbe mural. The gardens, designed by legendary California landscape architect Paul Thiene, include cascading waterfalls to the pool as well as tall, old trees.

The estate agent says: ‘Serving as both a destination on Jacqueline and John F. Kennedy’s honeymoon and the West Coast Presidential Election Headquarters for JFK, The Beverly House is truly anchored in American legend. Together with the adjacent property, This is an incredible opportunity to own one of the country’s most treasured properties, with unparalleled luxury, privacy and grounds to roam.’