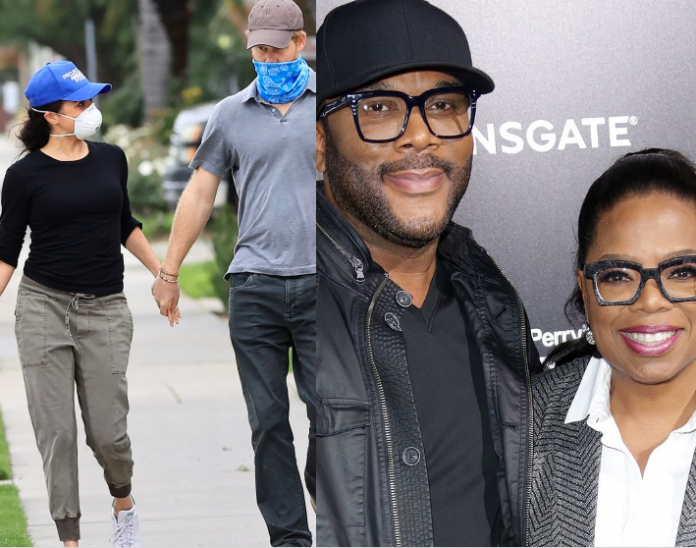 Prince Harry and Meghan Markle are living in a Beverly Hills mansion that belongs to Hollywood tycoon, Tyler Perry. DailyMailTV reveals that the Duke and Duchess of Sussex met Tyler Perry through their mutual friend Opray Winfrey and have been living in Tyler’s $18 million mansion home since moving to LA at the end of March.

After announcing their plans to step down from their roles as senior members of the royal family, the couple began staying at a waterfront home in Vancouver Island. However, they relocated to California after Canada announced it would be restricting its borders due to COVID-19.

When Prince Harry, Meghan Markle, and their 1-year-old son, Archie, relocated to the US, they moved into Tyler Perry’s eight-bedroom, 12-bathroom Tuscan-style villa. The villa sits on 22 acres on the top of a hill in the ultra-exclusive Beverly Ridge Estates guard-gated community, offering sweeping views of the city from the backyard.

It is not known whether Harry, 35, and Meghan, 38, are renting Tyler’s property or staying there as guests, but there is no record of the mansion having been sold.

Prince Harry and Meghan Markle are currently working on a documentary series with Oprah, while Perry has partnered with Oprah’s OWN television channel in the past.

A source told DailyMail.com: “Meghan and Harry have been extremely cautious to keep their base in LA under wraps.

“Their team helped them choose the location for their transition to Los Angeles wisely.

“Beverly Ridge has its own guarded gate and Tyler’s property has a gate of its own which is watched by their security team.

“Beverly Ridge is an excellent place to keep out of view. The neighbors are mostly old money and mega rich business types rather than show business gossips.

“It goes without saying that the location is stunning – just one of the most beautiful and desirable areas in LA.”