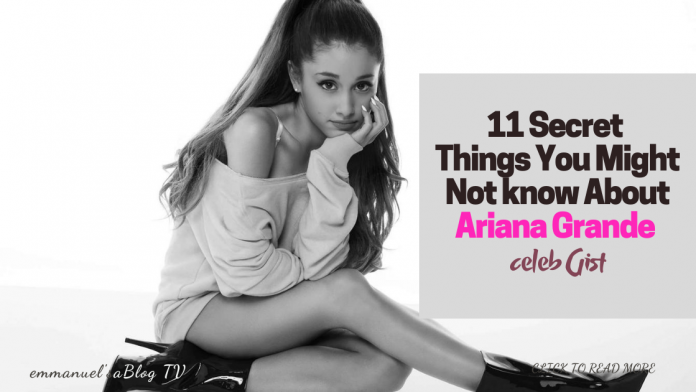 Ariana Grande got her start as a child actor on Nickelodeon’s “Victorious” and “Sam & Cat,” but regularly use to do Covers on YouTube. It wasn’t until 2013 that she debuted an official single—”The Way”—and started transitioning into a serious artist, with her first album “Your Truly” debuting at number one on the Billboard 200 chart.

Here are 11 facts about Ariana Grande even her biggest fan may not know.

1. She shares a manager with a few fellow big names.

Before Grande became a household name, she started out doing Covers on YouTube.

Among the songs she covered were Whitney Houston’s “I Have Nothing” with David Foster, Rihanna’s “Love the Way You Lie”, Mariah Carey ‘s “Emotions”, Adele’s “Rolling in the Deep” and Bruno Mars’ “Grenade.” When Grande eventually met Mars for the first time, she said she freaked out.

3. She resents her debut single and its music video.

Grande debut single called “Put Your Hearts Up” was recorded in 2011. The song, which was aimed at kids, has since been slammed by the singer, who told Rolling Stone it “felt so inauthentic and fake.”

“For the video, they gave me a bad spray tan and put me in a princess dress and had me frolic around the street. The whole thing was straight out of hell. I still have nightmares about it and I made them hide it on my Vevo page.”

Grande is not only a superstar, she’s a super animal lover! She is the dog mommy to ten little dogs named Ophelia, Coco, Toulouse, Cinnamon, Strauss, Lafayette, Pignoli, Myron, Snape, and Lily. Plus, a lot of them — if not all of them — are rescue dogs to boot!

5. Grande’s brother is also an entertainer and they are both very close

Ariana Grande’s older half-brother, Frankie Grande, has also worked as a musician, dancer and TV personality. He’s been a guest on “RuPaul’s Drag Race,” worked as a judge on “America’s Best Dance Crew” and was a contestant on “Big Brother” in 2014.

While attending the 2019 Nickelodeon Kids’ Choice Awards on March 23, Frankie Grande shared just how close he is with Ariana Grande.

“We’re talking 24/7. I was talking to her on my way in and I’ll probably talk to her as soon as I pick my phone back up. You know, we’re very, very close.”

6. She said she was raised Catholic, but now has a connection with Kabbalah.

Grande explained in an interview with Telegraph that she grew up Catholic, but later found a connection with Kabbalah.

“They were building a Kabbalah center in Florida so [me and my brother] checked it out and really had a connection with it,” Grande told Telegraph. “[Kabbalah] sort of stuck with me. And since then my life has unfolded in a really beautiful way, and I think that it has a lot to do with the tools I’ve learned through Kabbalah, I really do.”

Kabbalah is “an ancient wisdom” that focuses on “how to receive fulfillment” in one’s life.

She revealed that the Catholic church’s views on homosexuality led her to walk away from that religion. Her brother Frankie Grande is gay, which led the two of them to instead follow Kabbalah.

“When my brother was told that God didn’t love him, I was like, ‘OK, that’s not cool.”

Grande is allergic to bananas, shellfish, cats and some medicines.

Despite her four-octave range, Grande has had no formal vocal training. “Music just kind of happened, I never really trained for anything,” she said in 2013. “I played French horn for a few years, that’s where I learned a lot about sheet music and theory. I play a little bit of piano by ear but it’s mostly just singing, which I never was trained in.” Grande’s musical impression skills, however, are no coincidence: “Growing up, I was listening to Whitney Houston all the time, The Bodyguard soundtrack, a lot of Judy Garland and oldies, and divas.” Read page 2 for more secrets about Arina Grande