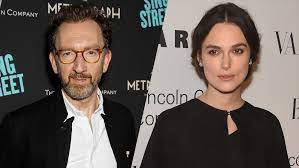 Keira Knightley has been nominated for two Oscars and starred in such hit movies as the Pirates of the Caribbean films, but it seems that not everyone is a fan.

Her Begin Again director, John Carney — whose new movie, Sing Street, is in theaters now — recently told the U.K.’s Independent in a very candid interview that he became “disenchanted” after working with her on the 2013 musical film, which co-starred Mark Ruffalo and Adam Levine.

“I think the real problem was that Keira wasn’t a singer and wasn’t a guitar player and it’s very hard to make the music seem real if it’s not with musicians,” said Carney, who also directed the musical Once. “And I think the audience struggled a little bit with that in Begin Again.

And as much as I tried to make it work, I think that she didn’t quite come out as a guitar-playing singer-songwriter. So I really wanted to work with musicians and actors that could play their instruments properly and sing and stuff like that.”