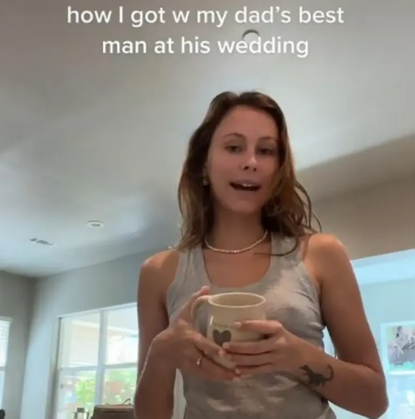 A daughter has recounted how she slept with her dad’s best man on the night of her dad’s wedding, despite him having a family.

Influencer Stella Barey, 23, said it was the first time meeting her father’s friend, who had flown over from Sweden to be his best man at his wedding.

The 23-year-old described her father’s best man as a “smoke show” and said she was instantly attracted, but never thought the feeling would be mutual.

However, after the ceremony, she was invited back to his Airbnb, where the pair ended up sleeping together.

She shared the story on TikTok in a two-part video series entitled “How I got with my dad’s best man at his wedding”. 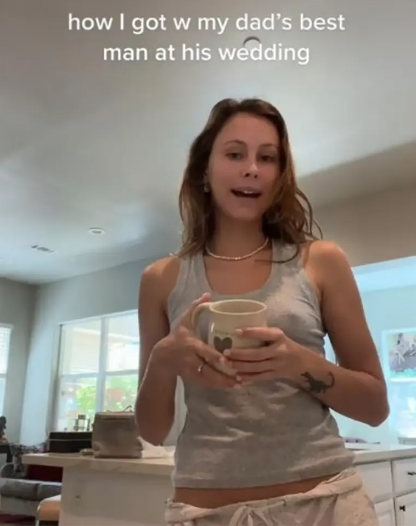 She explained in one video: “My dad is having his wedding to his now-wife in Montana, so I flew there with my best friend.

“I knew my dad’s best man was Swedish, but I didn’t know he was so hot.

“During the wedding, I’m sitting in the front row, and he’s a groomsman, so he’s standing right in front of me.

“We keep making eye contact, and I’m feeling so much tension between us, because he is so attractive. I just kept writing it off.

“I thought, why would he do that to my dad at his wedding? Why would he be into me in the first place? He runs a hedge fund, I just graduated.

“But cut to the after-party, that is where stuff got serious.”

Stella explained her dad’s best man, and her dad’s other best friend, who she has known since she was 4 years old, invited her back to their Airbnb. 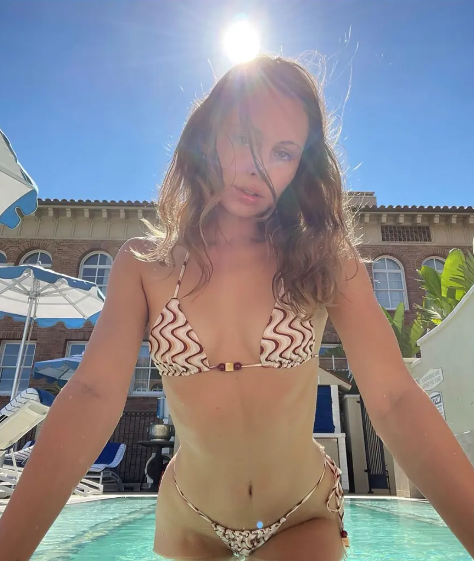 She recalled: “It’s around 4 a.m. at this point, and we start talking, we’re laughing, it’s all good.

“My girlfriend has fallen asleep, and there were no Ubers around to get back to our hotel.

“I was like, I’ll guess we have to sleep here, and I lay down next to him.

“I wake up the next morning next to my dad’s best man, and my friend. Obviously that night, we did stuff, with my friend sleeping right next to me.

“He drives us back, and I was so nervous because he is so cute, and I didn’t know if he even remembered that we got together.

“Or maybe he regrets it. We don’t talk about it, and I don’t tell my best friend.” 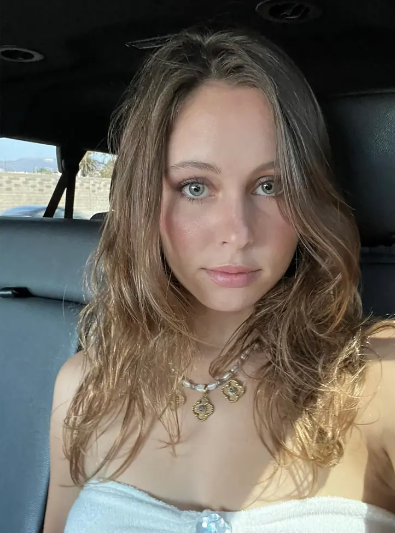 After her friend flew home, she was preparing to catch her own flight back to Los Angeles – but as it turns out, her dad’s best man was on the same flight.

“The whole time I’m so nervous, but so enamoured,” she disclosed.

“This is the weirdest part. Turns out he knew exactly what we did, and had no shame about it.

“But we didn’t talk about it all, until I’m saying goodbye to him. He was saying how he didn’t want to leave me, that he was going to miss me so much.

“Then he gets on the plane, then I get a text message from him. It’s a photo of his hand, with his nice watch on it, grabbing my thigh under the sheets the night we were together.”

When she got back home, Stella said they texted a few times, but she said their fling soon faded shortly after he got back to Sweden.

She continued: “I wasn’t really interested in keeping it alive.

“I didn’t really like that my dad could find out, and it was going nowhere. So I didn’t keep talking to him.

“He had a whole family back in Sweden, I think they were separated but still.