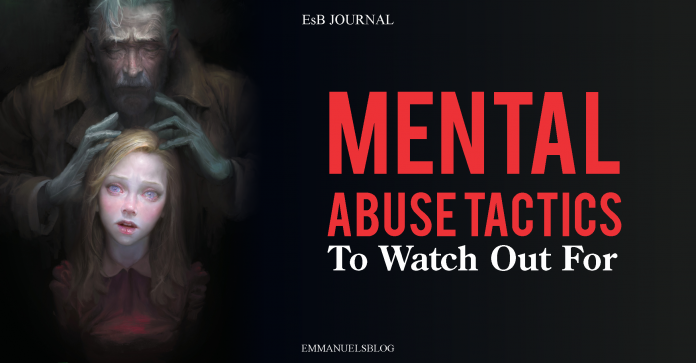 Mental abuse is a public health concern that affects both gender – either in marriage or relationship. Causing loss to lives and properties, it could be emotional, verbal, or physical. Both the abusee and the abuser needs counselling. Mental Abuse Tactics To Watch Out For

A man is incomplete without his mental health being intact, a disruption in mental health affects all other part of a man’s life; his feeling, emotion, cognitive ability and his interaction with immediate environment and people.

There are some abnormal behaviours, attitudes, characters and inherent genes that could mar or make our mental health.

They stare at people with glare of revenge; looking rebellious. Their gaze sends message to you and sends shivering down your spine. With the look in their eyes, you can read the intents of their heart. All what they do is to give a stern look on their face.

Their anger is always fuming mad because there is a surge in their adrenaline, they would always find reason to get angry at people and situations. They are easily riled and worked up, they are difficult to placate and they won’t hold back their emotions in the name of remonstration.

What they give is fake empathy, you would think they are sympathising with you but what they do and say is not real. One of the ways to confirm their crocodile’s tears is saying one thing in your presence and saying another thing in your absence. They appear they care, but you would always get to know that they are not the one you think they are.

LET’S TALK!! Why Do People Smoke – What Is The Benefit Of Smoking