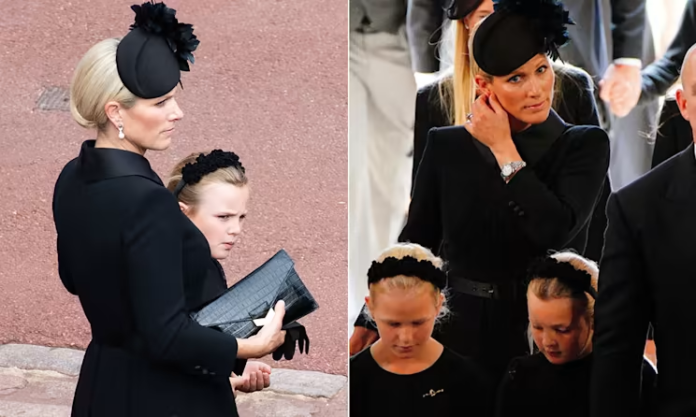 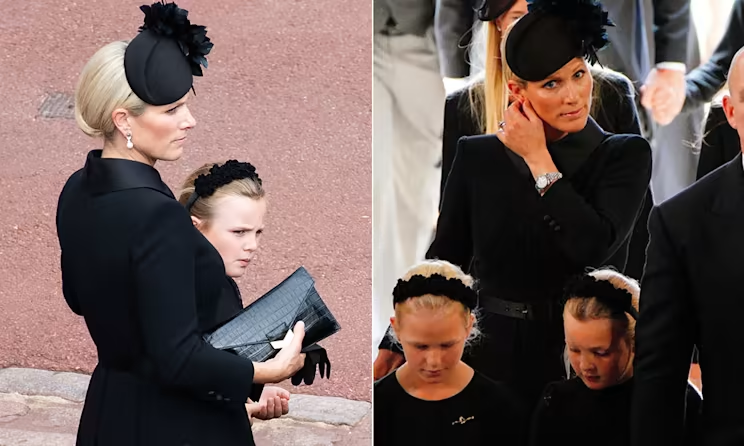 The eight-year-old walked out of St. George’s Chapel whilst hopscotching after the royal family bid a final farewell to Queen Elizabeth II.

Looking smart in a black dress and a matching headband, Mia had joined her parents for the difficult day. The youngster is the eldest child of the Queen’s granddaughter Zara, 41, and former rugby player Mike, 43.

The couple are also parents to daughter Lena, four, and son Lucas, one. Although Mia did not attend the service at Westminster Abbey, she joined her cousins Savannah and Isla, the two daughters of Peter Phillips, for the committal service.

Last week, Mia and her sister Lena were present alongside other members of the royal family as the Queen’s four children held a vigil for the late monarch.

Mia Tindall with her cousins and parents on Monday

Although it was expected that only the Queen’s children would be present, Zara and Mike brought along their young daughters. The young girls were dressed in black, including their hairbands. Their son Lucas, remained at home, and it is likely because of his young age, while the elder daughters might understand the proceedings a bit more.

Mike has previously talked about family gatherings with the royals and spoke about his first meeting with the Queen on his podcast, The Good, The Bad & The Rugby.

He told his co-host Alex Payne: “I did get sweaty palms. I think anyone would. She’s such a legend of a lady that I still get nervous now when I see her. I’m way more comfortable now, but… it’s been a journey.”