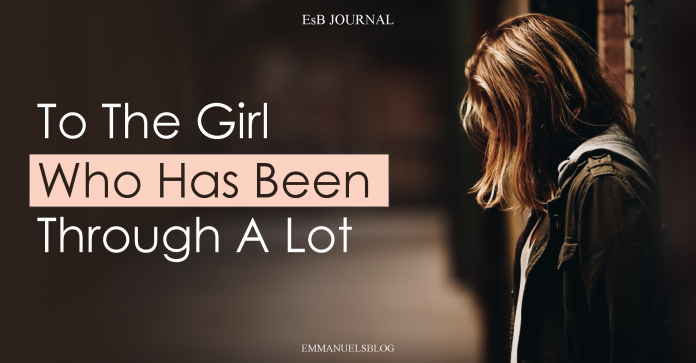 Imagine a young growing girl with a promising future from a good background, God fearing and a lover of people who had gone through a lot at a very young age! Although life is full of hurdles, challenges but one should not face them at a very young age because it undermines the potential in the young ones, and shake them up. TO THE GIRL WHO HAS BEEN THROUGH A LOT

I know of a young girl – very beautiful, a loner, ambitious who was raped twice in her formative years by a neighbour at a time when she was naïve. At that time, she felt life was over, her thought process was distorted, and she hated men so badly and concluded all men are the same. However, she never told anybody about the incident until she grew older. The trauma of the experience shattered her emotions, her feelings and even weighed her down in couples of time.

She kept silence and never told anybody about it because she thought she would be humiliated, sidelined, she thought she would be seen as a woe and not being able to get the love she needed from other people. Her family members were not sensitive enough to know what had happened to her, they could not sense her loneliness and withdrawal. Though on her part, she pretended that all is well, but she was bleeding inside. When other girls talked about being virgins, she feels very bad and depressed because she had always wanted to be a virgin to wait until her prince charming would come on horse to walk her down the aisle.

She carried the pain, burden and the trauma alone until she became an adult, this time she was able to overcome the fear of telling people about it and letting go of the past. As she was about healing from the painful experience, she lost her two loved ones to death in a period of three months while she was schooling, this incident shattered and battered her the more, and this led to another three years of loneliness, bitterness and wanting to be left alone, and to probably go hiding. As time goes on, she was able to let go of the past, build a resilience, got herself back and stay happy.

Below Are Lessons Her Experiences Taught Her:

1. She learnt to be sensitive.

2. She learnt to speak out when in trouble in order to get help and support from people.

3. She learnt to share her worries to people who genuinely care and not mockers.

4. She learnt keeping to oneself is never a solution, but a mechanism that makes one to bleed more.

5. She learns to build resilience and to be strong for herself.

6. She learnt to be happy at all times even when things are not rosy.

7. She learnt to accept and love herself intentionally.

8. She learnt to be a voice for her generation.

9. She learnt to keep positive people around her.