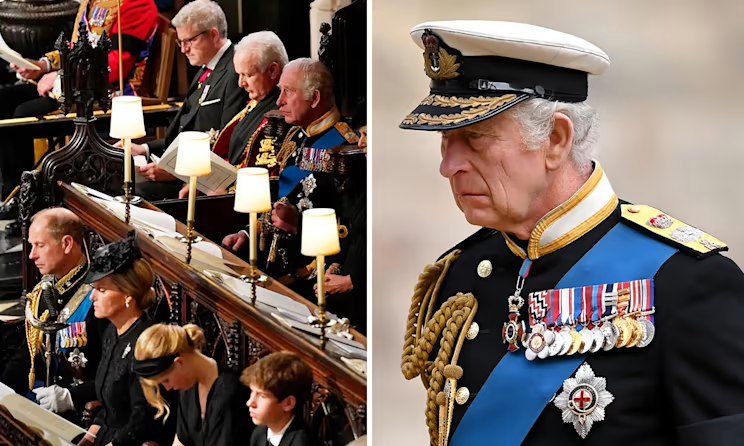 King Charles and Camilla, Queen Consort, along with other members of the family, took their seats in the chapel’s quire after the coffin of Her Majesty the Queen was brought in by the bearer party.

The new monarch and Queen Consort sat on the far right-hand side of the second row while directly in front of them was an empty seat. The reason for the empty space is a matter of protocol: to ensure that the monarch has a clear and unobstructed view of the service.

Other events prior to the Queen’s death saw a similar occurrence. During the wedding of Princess Eugenie and Jack Brooksbank, Her Majesty and the late Prince Philip sat in the second row with an empty seat in front, while the Duke of York and Sarah, Duchess of York, sat directly next to the unoccupied space.

The same was done at Prince Harry and Meghan Markle’s wedding in May although, at the time, rumours falsely swirled that the groom had wanted to keep the seat empty to honour of his late mother Princess Diana.

The State Hearse halted at the bottom of the West Steps shortly before 4pm during the Coffin Procession, with the royals in tow, entered the Chapel. King Charles, Camilla, Princess Anne and Prince Andrew once again followed their mother’s coffin into the chapel, with the Prince and Princess of Wales and their two elder children, Prince George and Princess Charlotte.

The service took place at St George’s Chapel in Windsor

The Service was led by The Right Reverend David Conner, KCVO, Dean of Windsor. After the prayers and hymns, the Dean of Windsor, will do a Reading of Revelation 21.1-7. Other ministers will read various prayers, including The Lord’s Prayer.

There was then a Committal where the coffin is lowered as the Dean of Windsor reads The Psalm, 103. 13-7. Shortly after, the Archbishop of Canterbury pronounced the Blessing.