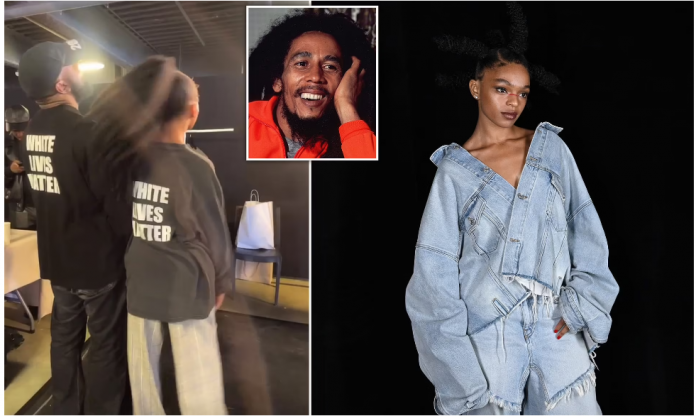 American rapper, Kanye West made a fashion statement at his surprise Yeezy fashion show on Monday October 3, wearing a black sweatshirt with the slogan ‘White Lives Matter’ written on it,

Fashion models who turned out for the show also wore clothing with the same message. It appeared to be a response to the Black Lives Matter movement that was founded in 2013 following the fatal shooting of Trayvon Martin by George Zimmerman.

Selah Marley, 23, the daughter of former Fugees lead singer Lauryn Hill and the granddaughter of the iconic Bob Marley, was among the models.

Selah was captured in a video talking and joking with West at the event. In the video, Selah is wearing a White Lives Matter shirt.

She captioned the video: ‘Love u @KanyeWest.’

Selah was born during Hill’s long-term relationship with Rohan Marley, the son of reggae artist Bob Marley. The couple had five children when they were together between 1996 and 2009. The pair never married.