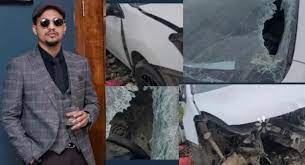 Sad news have descended the entertainment industry in Nigeria as a reality star Rico Swavey has just been confirmed dead after a ghastly car accident on the 12th of October 2022.

On the 12th of October 2022, Rico was involved in a ghastly car accident, and was rushed to the hospital on emergency for treatment. Sadly, reports showed that the hospital he was admitted into, failed to commence treatments soon, leading to his untimely death. This claim is backed by videos that have surfaced, showing nurses laughing as they made video while Rico was in the corner, obviously needing treatment.

After his death, celebrities, most of which included his fellow housemates in 2018 season of Big Brother Naija Show toot to their pages to express their pain and sympathy to his family. Some of the noted celebrities included Alexandra Amuchechukwu Asogwa, popularly known as Alex-unusual, and Abiri Oluwabusoyomi Khloe, also known as Kokobykhloe, who also happen to be his fellow housemates and closest friends inside and outside the Big Brother House.

Our prayers and condolences remain with the family at this time, as they deal with the irreparable loss.