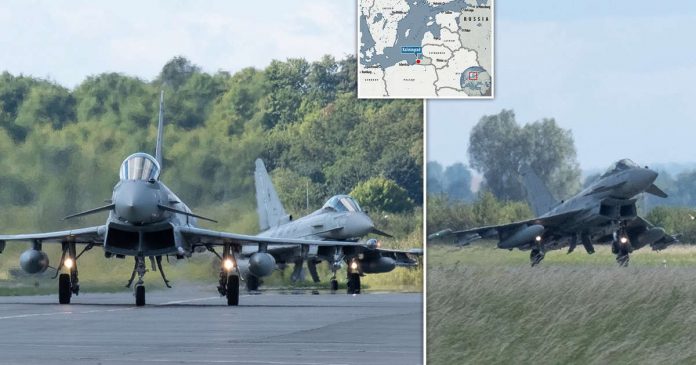 Four Russian fighter jets have reportedly been intercepted and forced to return to base after they infringed on Polish air space.

Aeronautica Militare announced that the squadron took off from the Russian exclave of Kaliningrad, sandwiched between Poland and Lithuania, and flew an aggressive path which took them through Polish skies though the post did not specify when the infringement occurred.

The offending jets then continued over the Baltic Sea before heading towards Sweden.

Italy quickly scrambled four Eurofighter Typhoon jets in response which took off from Poland’s Malbork air base and intercepted the Russian aircraft, ‘forcing’ them to return back to Kaliningrad.

The air force said the Russian jets also infringed on Swedish air space, but this claim was denied by the Swedish Armed Forces’ press service which said Putin’s aircraft were merely over international waters.

Rome’s planes were stationed in Poland as part of NATO air policing mission this summer.

Poland is a long-time member of NATO having joined in 1999, while Sweden earlier this year applied for membership to the security bloc alongside Nordic neighbour Finland.

Italian jet fighters are currently stationed in Poland as part of the Baltic Air Policing operation, which is an expression of the solidarity of NATO countries with Lithuania, Latvia and Estonia, i.e. those countries of the Alliance that do not have their own military aviation.

Kaliningrad is a Russian province which lies between Poland and Lithuania.