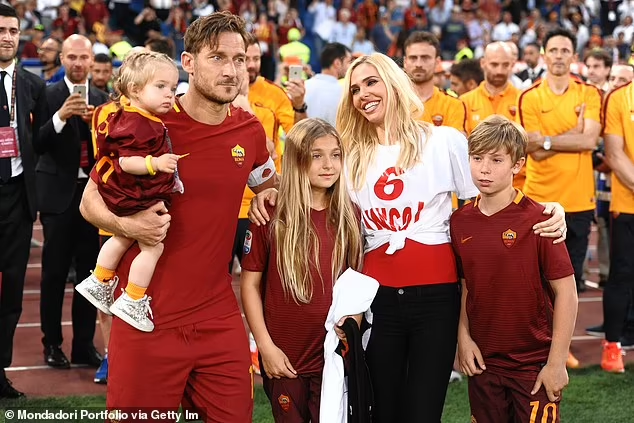 Italian football legend, Francesco Totti is set for a bitter legal battle with his ex-wife Ilary Blasi after it was claimed that she stole his collection of Rolex watches, and in retaliation, he hid her designer handbags and took £3,500 worth of shoes.

Totti, who spent his whole 24-year career at Roma, scoring 307 goals in 786 games, announced he had split from Blasi in July. The pair were married for 17 years and they share three children together.

Last month, he claimed his marriage had broken down because Blasi did not support him following his retirement from football and when his father passed away due to Covid-19.

The 45-year-old retired from the sport in 2017 and has admitted he struggled to cope without being on the pitch.

During his challenging times, he said his wife was not there to comfort him. Totti has also claimed Blasi cheated on him which impacted his mental health.

It has now been claimed in a report by Corriere della Sera that Blasi stole Totti’s Rolex watches, which resulted in him hiding her handbags.

The report states that Totti accused his ex-wife of taking the watches, with the Italian admitting he did hide her handbags in retaliation and had hoped for a ‘trade’ ahead of their impending court date.

‘What could I do? I hid her handbags, hoping we could trade,’ Totti had told the Italian outlet in an interview.

Meanwhile, Totti also reportedly has several pairs of Blasi’s shoes, worth up to £3,500, according to The Times.

The pair are set for their first court hearing on Friday (October 14) after their separation earlier this year with their possessions to be separated through that means.

Ahead of the hearing, Blasi had posted a video on her Instagram account where she was in front of a Rolex shop, before she winked at the camera, presumably in reaction to the allegations she faces.

Totti had previously stated in September that he had hoped their bitter split would not reach court.

‘I fear that with Ilary it will end up in court. I still hope that we can reach an agreement,’ he said to Corriere della Sera, as quoted by Marca.

‘Now I am silent. This afternoon, it cost me six months of life. I would have preferred a thousand times to talk about football and Roma, which I always carry in my heart.’