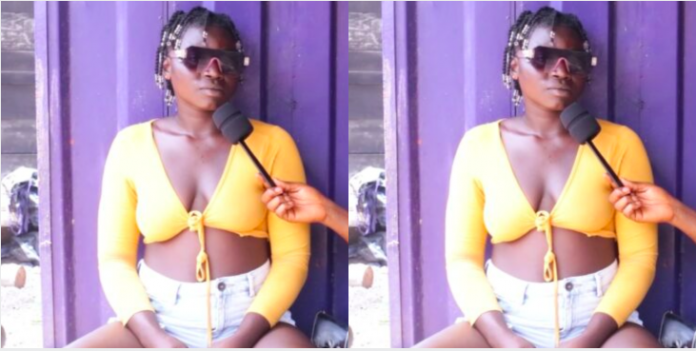 A popular Ghanaian hookup girl has revealed that she has slept with over 1000 men.

The 22-year-old sex worker, Gifty Osei popularly known as Ohemaa Baddest, discussed her career as a stripper/sex worker in an interview broadcast on SVTV Africa.

Ohemaa who also revealed that she lost her virginity when she was 10 years old, added that despite the danger her job portends, she has gotten addicted to it.

“I can’t count. There are a lot…about 1000 men. I’ve been with a lady too. My best friend introduced me to it. I didn’t know she was a lesbian. We were together for four years. She is the only girl I’ve been with.

“A group of eight guys raped me, took away my belongings and threw me out. A taxi driver also did the same. It is a risky business, but I haven’t decided when to stop because I’m addicted to it.”

Ohemaa also talked about her smoking habit which began during her final year in high school. She added;

“I began with cannabis toffee. Every time I took it, it stimulated my sexual desire. Very pleasant.”