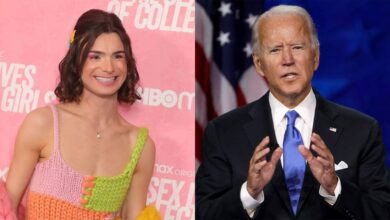 US President, Joe Biden has stated he doesn’t think states should have the right to regulate sex change surgeries or treatments .

Biden, in an interview with a transgender TikTok star, denounced Republican states that have passed laws attempting to ban or limit sex change surgeries and transition treatments – like hormone blockers – for children who identify as non binary or transgender.

Biden spoke with a panel of six activists for the NowThis News presidential forum which aired on Sunday, October 24. One of the six panelists was TikTok star Dylan Mulvaney who is documenting their transition from a male to trans woman.

He opined that states shouldn’t have the power to regulate any health care related to a person transitioning from one sex to the other.

‘As a moral question and as a legal question, I just think it’s wrong,’ the president added.

‘I mean, no state should be able to do that, in my view. So I feel very, very strongly that you should have every single solitary right including use of your gender-identity bathrooms in public.’

Alabama, Arkansas, Texas and Arizona all enacted laws or policies earlier this year restricting youth access to sex change treatments, care and surgeries. In some cases, these laws impose penalties on adults who facilitate access to this care.

Mulvaney started transitioning to female earlier this year and has been documenting his journey. Republican lawmakers pushing legislation that would regulate gender-affirming surgeries and treatment argue they are dangerous and could cause irreversible changes in younger patients.

‘It’s day 222 of being a girl. I’m in Washington D.C., and I’m going to the White House to speak to the President of the United States,’ Mulvaney said in a TikTok from a hotel room while wearing a shirt that says, ‘Don’t mess with trans kids.’

‘You know that phrase, ‘I think I may have girlbossed too close to the sun?’ Well that’s how I feel today,’ Mulvaney continued. ‘Because I get to sit down with Joe Biden and NowThis News, and I get to ask him a few questions surrounding trans issues in the United States and talk to him about my transness, and I really just want to represent my community the best that I can.’

Most legislation in republican led states have focused on minors, not adults.

‘I think that it’s really important that we continue to speak out about the basic fundamental rights of all human beings,’ Biden said

‘And the idea that what’s going on in some states, I won’t get into the politics of it, but in some states, it’s just, it’s outrageous, and I think it’s immoral,’ the president added. ‘The trans part’s not immoral, what they’re trying to do to trans persons is immoral.’