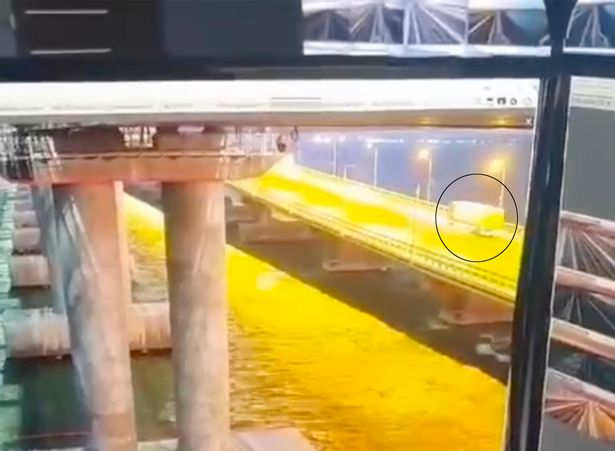 A mysterious “wave” appears to appear under the bridge between Russia and occupied Crimea just before it was blown up in a spectacular setback for Vladimir Putin.

It has fueled speculation Ukrainian special services used a boat or drone to launch the attack, which has damaged Russia’s supply lines.

The structure – the only bridge between Crimea and Russia – exploded today, killing at least three people. Moscow claimed a truck bomb caused the blast but the speaker of Crimea’s Kremlin-backed regional parliament accused Kyiv of being behind the explosion.

Putin, who turned 70 yesterday, responded to the embarrassing attack by ordering tightened security at the bridge. He said the FSB security service would be responsible for strengthening protection measures.

A “wave” is seen flickering under the structure moments before the explosion.

So far there have been no reports of sightings of incoming missiles.

But some witnesses claimed there were two explosions.

Putin had claimed the bridge, which he opened personally in 2018 to much fanfare in Russian-state media, was being protected by a maximum security operation which even included attack dolphins.

A top aide to President Zelensky boasted that “Putin should be happy. Not everyone gets such an expensive birthday present”, and the Prime Minister of Estonia suggested the attack was committed by Ukraine.

A section of the bridge has collapsed into the sea and seven oil tankers on a train caught fire in the blast.

Long fuel lines are already forming in Crimea, despite Russian claims to have enough supplies to last two weeks.

The 12-mile bridge across the Kerch Strait linking the Black Sea and the Sea of Azov opened in 2018 and is the longest in Europe.