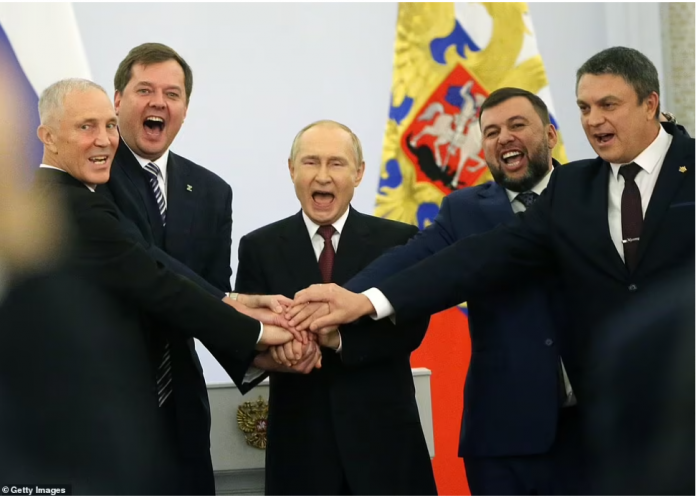 Russian President, Vladimir Putin has threatened to use nuclear bombs to defend his ‘new territories’ in Ukraine after annexing four Ukrainian regions to Russia.

During his speech on Friday, he also vowed to ‘smash’ the West and liberate the world, raising fears he is planning to deploy Moscow’s huge nuclear arsenal.

The Russian despot declared that ‘millions of people’ had ‘opted’ to become vassals of Russia in sham referendums – saying they ‘are our people, forever’ to a standing ovation in the Kremlin’s grand Georgian Hall. He was joined by Chechen warlord Ramzan Kadyrov, defence minister Sergei Shoigu, and staunch ally Dmitry Medvedev.

In his speech, he suggested that the US had set a ‘precedent’ for using nuclear weapons in Hiroshima and Nagasaki, hinting that he could be considering his own atomic strike either against Ukraine or its allies.

He also mentioned: The Vietnam war, the Opium Wars, the First and Second World War, Goebbels, Satanism, sex changes and homosexuality in his address. He decried what he called ‘neo-colonialism’, vowed to ‘smash Western hegemony’, and spoke of Russia’s ‘destiny’ to liberate the world.

Ukraine’s President Zelensky hit back immediately at Putin. He vowed never to respect the annexation and declared that Ukraine will officially apply to join NATO and will not negotiate with Russia so long as Putin is in power.

Boris Johnson, former Prime Minister who became an iconic figure to Ukraine, branded Putin’s speech a ‘disgrace’ and vowed the UK will stand with Ukraine ‘without flinching until their country is whole and free.’