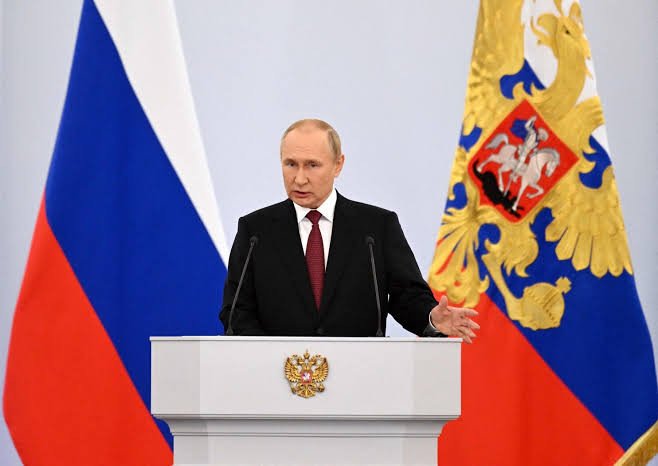 “I want the Kyiv authorities and their real masters in the West to hear me. For everyone to remember. People living in Luhansk and Donetsk, Kherson and Zaporizhzhia are becoming our citizens. Forever,” the Russian leader told guests in St. George’s Hall, the opulent Kremlin venue for the event.

The ceremony to annex four occupied regions, which make up almost a fifth of Ukraine’s territory, came after referendums held by Russian-backed officials in eastern and southern Ukraine The votes are illegal under international law and have been dismissed by Ukraine and Western nations as “a sham.”

Putin said those taking part in what the Kremlin calls its “special operation” in Ukraine are “heroes.”

“There is nothing stronger than the determination of these people to return to their true historical fatherland,” he said.

He also called on Ukraine to “cease fire” immediately and “sit down at the negotiating table.”

“But we will not negotiate the choice of the people. It has been made. Russia will not betray it.”

In his speech, Putin also accused Western leaders of trying to “weaken and destroy” Russia, while giving his version of a Russian history lesson.

“The West has been looking for and continues to look for a new chance to weaken and destroy Russia, which they have always dreamed of splitting our state, pitting peoples against each other.”

He added that “the collapse of Western hegemony that has begun is irreversible.”

“It will no longer be like before,” Putin said.

“West wants to see Russia as its colony, to plunder its natural resources & exploit Russians as a crowd of soulless slaves”

“We’re witnessing sheer satanism in West – Do we want our children to be offered operations on sex changes? It’s unacceptable! – Our future is different. We’re fighting for a great, historic Russia”

Watch the videos below…