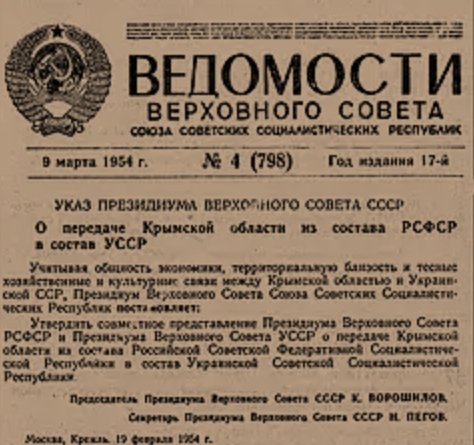 History has it that Crimea was part of Russia from 1783, when the Tsarist Empire annexed it a decade after defeating Ottoman forces in the Battle of Kozludzha, until 1954, when the Soviet government transferred Crimea from the Russian Soviet Federation of Socialist Republics (RSFSR) to the Ukrainian Soviet Socialist Republic (UkrSSR).

It is important to remind you that year 1954 was the 300th anniversary of the Treaty of Pereyaslav. Back then, only the transfer announcement was made and people were made to wait knowing the reasons behind the transfer.

Questions like ‘What has happened? What is happening? What will happen now?’ are words on the lips of every individuals who learned of this shock move. Is this a kind of treaty that spells the unification of Russia and Ukraine apart from what is on the paper, really? Obviously not, because even after the announcement, years of further struggling and warfare had to take place before full unification occurred. As a result, several thoughts and arguments from diverse school of thought ensue.

Later in 1954, scripted proceedings of the USSR Supreme Soviet Presidium meeting was published with two official rationales that tell the motives for the transfer.

1) the cession of Crimea was a “noble act on the part of the Russian people” to commemorate the 300th anniversary of the “reunification of Ukraine with Russia” (a reference to the Treaty of Pereyaslav signed in 1654 by representatives of the Ukrainian Cossack Hetmanate and Tsar Aleksei I of Muscovy) and to “evince the boundless trust and love the Russian people feel toward the Ukrainian people”; and

(2) the transfer was a natural outgrowth of the “territorial proximity of Crimea to Ukraine, the commonalities of their economies, and the close agricultural and cultural ties between the Crimean oblast and the UkrSSS.”

Though the two official rationales are met with a lot of controversies that make the transfer less credible, which is rightly so.

So to say, the transfer has only benefitted one country, and it looks like it is a smoke screen. The transfer increased the ethnic Russian population of Ukraine by almost a million people. We can as well say that the controversies surrounding the legality of the transfer remained a sore point in relations between Ukraine and Russia for the first few years after the breakup of the Soviet Union, and in particular in the internal politics of Crimea.

There was confusion about the status of Sevastopol and whether it was a part of the transfer as it had a degree of independence from the Crimean Oblast and never formally ratified the transfer, although it was later mentioned as Ukrainian territory in the Soviet Constitution and the Belavezha Accords between Ukraine and Russia.

In 1994, a Russian nationalist administration under Yuriy Meshkov took over in Crimea with the promise to return Crimea to Russia, although these plans were later shelved but the idea still lingers. However, in a 1997 treaty between the Russian Federation and Ukraine, Russia recognized Ukraine’s borders, and accepted Ukraine’s sovereignty over Crimea. And the treaty expired on 31 March 2019.

The transfer of Crimea from Russia to Ukraine remains a wound that would never heal, even its scar is visibly seen in the ongoing war.