Emmanuel's Blog
Home Lifestyle Relationship An Insight to a Married Life in Kano on a ₦150k Monthly... 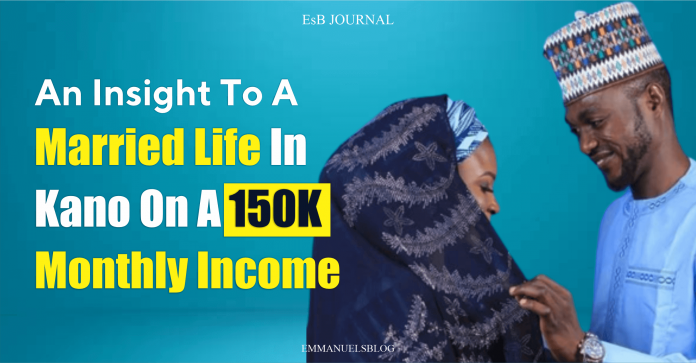 LOVE & FINANCE – “I don’t mind polygamy; I don’t believe in owning anybody. He sort of knows he doesn’t own me either, and he’s made peace with it. I may step out; he just doesn’t want to know.”

Tayyiba had been praying for her runaway boo, Faruk to return to her after he had ghosted her for two years.

Now that her lover returns, she got married to him, and ever since, she has been enjoying married life in Kano on a ₦150k monthly income.

Tayyiba and her husband grew up as neighbours ​​but started dating when she was about 19 — then they broke up because their parents didn’t want them married cause of tribal differences.

But somehow, they reconnected in 2016. And in 2017, they got engaged without the blessings of their parent. Not until 2018, both parents gave their consent and they got married.

Tayyiba lives in Kano and works as a media journalist.

She gives a breakdown of how she is enjoying her married life with ₦150k monthly income, Tayyiba tells Zikoko.

Subscriptions: Around ₦5k; she shares some streaming apps with friends.

Interviewer: How did you meet your husband?

Tayyiba: We grew up as neighbours ​​but started dating when I was about 19 — then we broke up. Our parents didn’t want us married cause of tribal differences, but somehow, we reconnected in 2016.

By that time, I suppose we’d both become family rogues. In 2017, we were engaged without their blessings. In 2018, they came on board, and we got married.

Interviewer: How did you reconnect?

Tayyiba: Prayer, actually. I was really heartbroken when he… just left me. I tried all I could to reconnect, but he didn’t budge.

So I started to pray at night. I kept asking God to help me forget him if he was bad for me. Or give him to me if it was His will. In 2016, I won a trip to Nairobi, posted about it on LinkedIn and noticed he’d checked out my profile.

He started liking my posts on Facebook again. Then he sent a message on WhatsApp… a causal “Good afternoon” as if we were some old acquaintances catching up. I told him to state his business or get out, please.

Guy said he wanted me, and he was ready to do anything, including eloping together.

Interviewer: Hollup. Tell me about the breakup.

Tayyiba: In 2014, my parents wanted to arrange for me to a family friend’s son, a young Airforce officer — we still talk to date.

Shebi I would’ve been travelling all over the world, spending airforce money by now. But I said I’m not ready to marry until after school o. Plus, I told them I have husband already. They said, “Who?” I said, “Faruk*”.

Popsi didn’t want anything to do with Faruk because he’s not from our tribe, but he later gave in.

My parents said I should ask him to send his people to come and make a small commitment, a formal engagement, so everyone will know we’re just waiting till I graduate.

Tayyiba: Toh, he just became scarce, leaving me with shame in front of my parents. They were now like, where’s the boy you were fighting to be with na? Hard girl like me fa?

Interviewer: That must have hurt. How come you kept praying for him?

For a Northern girl who isn’t particularly mely, that’s a big deal. So when he slid into my DMs for a second chance and apologised, it was easy to forgive him. But I didn’t take him seriously until he proposed not long after.

Interviewer: Just like that? Did he tell you why he ghosted?

Tayyiba: Yes o. He’s a people pleaser, so he couldn’t bring himself to break up with me to my face because his parents initially didn’t like the idea of him getting married to me.

We had a lot of conversations, and he convinced me that family would no longer be a problem. In all honesty, they’ve been very respectful and kind since then.

He apologised and swore he was serious this time even if we had to elope.

Interviewer: How much does he earn?

Tayyiba: His salary is about ₦400k, but he has other sources that raise his income to around ₦600–700k.

Interviewer: So how do y’all run the finances?

Tayyiba: He’s a very busy person, so I tend to focus on sending him meals at work to ensure he eats. But every year, I save up around ₦100k to buy him gifts for his birthday and our anniversary. The money comes from my side hustle.

I put aside any extra cash I get for his clothes because if I leave him, he can wear the same things he’s had for ten years. He covers the heavy stuff like rent, which is ₦400k per annum.

He covers 80% of our food costs — about ₦150k monthly because food is cheap in the North — 80% of our medical costs, 50% of clothing costs for our two kids and 20% of my clothing costs. I use percentages because these costs aren’t fixed.

We often buy on impulse, especially the babies’ clothes. I know he saves ₦100k every month and sends ₦50k to our kids’ accounts. I send ₦40k to this account — let it not be like their mother doesn’t care, LOL.

Interviewer: How much do you budget for romanzz?

Tayyiba: We haven’t been able to vacation together, sadly. They want to use work to kill him — and also, he has aerophobia. But he buys me a lot of abayas. Each one costs ₦20-25k, and I get like 12 a year.

We watch at least one movie together weekly and sneak suya and drinks into the cinema hall so we don’t spend more than ₦5k in total. Once every month, we go on a date and spend ₦15k max; there are really cool and affordable leisure places in Kano.

Sometimes I pay for the dates, and most times, he does. When we watch films indoors, we just buy ₦5k suya, eat to our hearts’ content and freeze whatever remains.

Before the children, we used to do staycations every once in a while. We’d check into a cool hotel (₦20–25k per night) and spend the weekend eating mostly junk because those staycations were for sex. Good old childless days…

Tayyiba: We can’t just up and leave; I’d have to plan and get trusted people to babysit. I’d also have to pump milk (God, I hate pumping milk).

And I worry every time I’m away from my babies. So I’m not sure I can staycation without guilt.

Interviewer: Okay. What kind of conversations do you have with your husband about money?

Tayyiba: Our needs, savings and investments in our personal developments and in money-making ventures. We talk about feeding costs, medicine costs and doctors’ appointments.

And don’t forget black tax — very important. We discuss how much we can give out.He has investments with his siblings as well.

I have two lands — one from my dad; the second was part of my bride price — so we make plans on how to develop them.

I also have a farm the floods helped me wash away. I got it with my sister and had high hopes for it.

Interviewer: Tell me about the personal development you invest in

Tayyiba: My husband takes some courses and exams to boost his career, and they don’t come cheap, so we have to plan around them. Being a doctor is expensive.

For the last one, he had to go to Lagos. He bought return flight tickets (₦200k, no thanks to Buhari) and stayed for almost two weeks to study with his mates — hotel and feeding cost around ₦10k per day.

Then the exam itself was over ₦200K, including the registration fees. Because he hates planes, he fell ill afterwards — nausea, diarrhoea and others — so we spent another ₦10k on treatments. It’s also why we can’t go on vacations, before he’ll start vomiting when we’re supposed to be enjoying ourselves.

As for me, I have my eyes set on fashion school, which’ll cost ₦150k, but this man wants to force me to finish my master’s first. I’m focusing on my research so I can be done with it soon — if ASUU will let me.

Interviewer: Has the income gap between you two ever been an issue?

Initially, I was super conscious of it and picked fights because I thought he was using the fact that he had money to run away from chores.

When we married, I was busy doing housegirl work they didn’t send me to do. He thought I enjoyed cleaning. I thought he was leaving the domestic chores to me. I found a way to link it to him not respecting me because I don’t earn much.

We got to know each other better as time went on though. So we got a house help and laundry man. We also discovered my ego is big, and I don’t like to beg, so he just sends me money and leaves his wallet and debit card within reach.

Interviewer: What’s your ideal financial future as a couple?

Tayyiba: Toh, our ideal financial future is to get out of this country. We plan to japa in the next three to four years through him. Hopefully, I get a job as a dependent first, then later, as a resident. We’re looking at Canada or Australia.

I’ll then try to go into real estate wherever we land. I’m certain my husband will return home to take another wife after his finances are more flexible.

Tayyiba: He wants lots of kids for some reason. Me, if I will born again, highest one more. We agreed on polygamy before we got married; it’s in our marriage contract.

I just won’t stay in the same house with another woman. We also agreed I’ll get vacations when I’m feeling “jealous”. Of course, it’s all under the condition that he’s financially able to fund them.

I don’t mind polygamy; I don’t believe in owning anybody. He sort of knows he doesn’t own me either, and he’s made peace with it. I may step out; he just doesn’t want to know.

Ex-Girlfriend Killed Mother of Four in Front of Her Son, Months After Filing A Restraining Order Against Her

R. Kelly seeks an outright reversal of his conviction on child pornography and other sex-abuse related charges