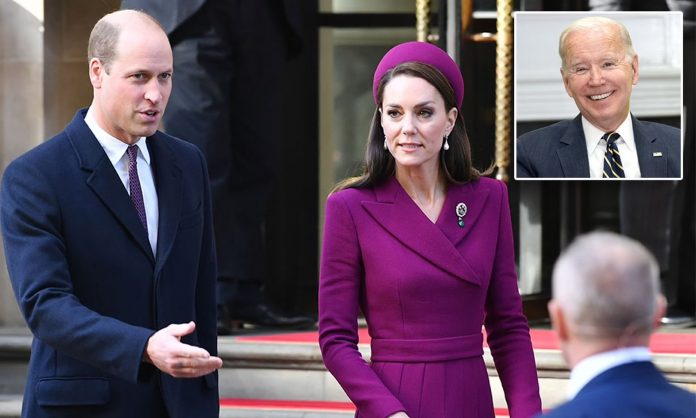 Prince William and Kate are rumoured to be meeting Joe Biden this week in their first overseas trip since the death of Queen Elizabeth II, it has been reported.

The Prince and Princess of Wales will be in Boston, Massachusetts where William will give out awards at the Earthshot Prize on Friday night.

The US President is also planning on being in the same city on the same day for a political fundraiser.

William and Kate are due in Boston today for a three-day trip culminating on Friday with the prince’s “Super Bowl” moment – the staging of the awards he founded to discover and scale up environmental solutions to repair the planet.

Just days later next Tuesday, Harry and Meghan will be just 200 miles away in New York City where they will accept an honour at the Robert F. Kennedy Ripple of Hope Awards.
The estranged couples were last seen side by side in the aftermath of the late Queen’s death and at her funeral in September.

But despite their close proximity next week, it has been reported there will be no sign of the brothers and their wives catching up.

However, sources familiar with arrangements say Biden and the royal couple are trying to take advantage of the fact they will both be in the same city on the same day, reports DailyMail.com.

Neither side has added a meeting to their publicly-available agenda.

It is also William’s first trip to the US in eight years. He previously went to meet former President Barack Obama and Secretary of State Hillary Clinton.

It comes after it was revealed earlier today that singer Billie Eilish will lead a stellar line-up for William’s Earthshot Prize awards ceremony on Friday.

She will headline the entertainment, which includes Annie Lennox, Ellie Goulding and Beyoncé protégés Chloe x Halle, performing at the MGM Music Hall in Boston.