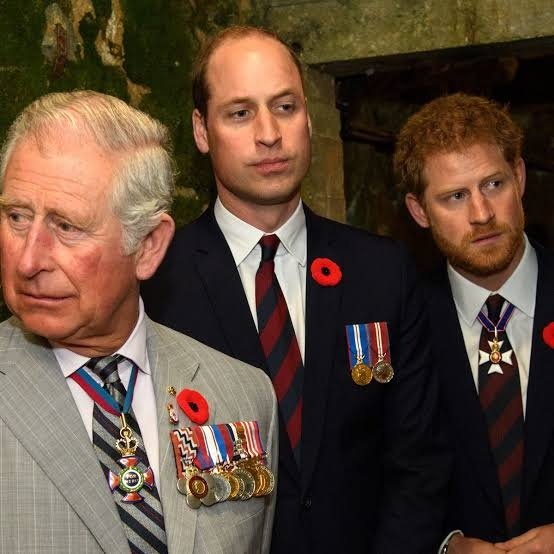 King Charles beamed as he sat surrounded by his family for an official photo to mark his 70th birthday, but behind the image, the drama was developing.

His wife Camilla, sons Princes William and Harry, and daughters-in-law Meghan Markle and Kate Middleton looked happy and relaxed, while his grandkids George, Charlotte and Louis stole the show with their cute smiles and poses.

While fans loved the family shot, it was reportedly an “absolute nightmare” to arrange as William and Harry made very little effort, a new book has claimed.

In their bombshell biography Finding Freedom, authors Omid Scobie and Carolyn Durand claim the royal brothers “can be hot and cold with their father”.

They also say that funding disagreements, including those over Meghan and Kate’s wardrobes, have caused issues over the years.

Their relationship is made even more “complex” due to the fact Charles is technically Harry and William’s boss.

The authors write: “The boys can be hot and cold with their father’ disclosed a source, who gave the example of planning the photo session for Charles’ 70th birthday, which they called ‘an absolute nightmare’.

“Neither William nor Harry made much of an effort to make themselves available’, the source said.”

Two photos from the photoshoot were released, the first a more formal snap and the second a candid picture that shows the family laughing.

The book also claims that money was also a regular source of tension between Charles and his sons.

As at the time he looked after the Duchy of Cornwall, Charles had to “control the purse strings” when it came to much of the princes’ spending.

The authors write: “The brothers sometimes had to vie for additional funds for projects from their father, who also helped to cover expenses related to Camilla and some of those for his sons (including Kate and Meghan’s wardrobes).

“‘They actually genuinely have to debate who gets what amount from their father to fund their projects’, an aide said.

“While Charles may be a father to Harry, he’s also their boss, and that makes their relationship complex for a number of reasons.”