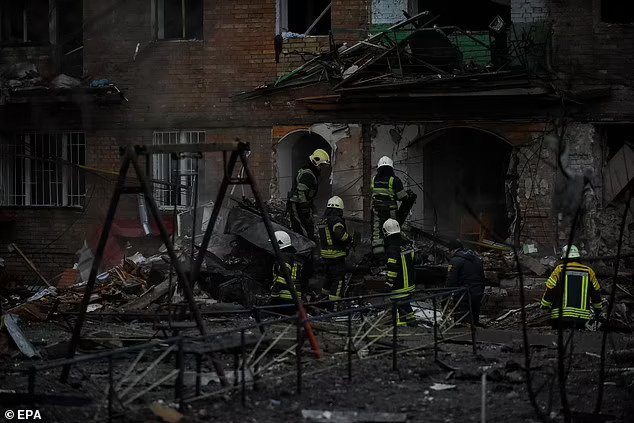 Russia on Wednesday blamed Ukraine for a blast on Polish territory that killed two people and launched a wave of international concern the previous day.

The Defense Ministry in Moscow said that the missile which landed in the village of Przewodow near the Ukrainian border was struck down by Ukraine’s air defenses.

“Photographs of the wreckage… were unequivocally identified by Russian military experts as fragments of a guided anti-aircraft missile of a Ukrainian S-300 air defense system,” the Defense Ministry said in a statement.

Russia’s strikes Tuesday only hit targets on Ukrainian territory, with its closest target located at least 35 kilometers away from the Ukraine-Poland border, Defense Ministry spokesman Igor Konashenkov said in a daily briefing.

The Kremlin meanwhile slammed what it called a “hysterical and Russophobic” response from the West toward the deadly blast.

Kremlin spokesman Dmitry Peskov said that Poland had all the facts showing that the missile debris belonged to an S-300 missile system, which he said has “nothing to do” with Russia.

He then praised the United States’ “measured” response to the incident after U.S. President Joe Biden said it was “unlikely” that the missile was fired from Russia.

Reports Wednesday said Biden told NATO allies that the missile that fell into Poland was a Ukrainian air-defense missile.

Ukrainian Foreign Minister Dmytro Kuleba earlier rejected as a “conspiracy theory” the idea that it may have been a Ukrainian missile.

The missile fell on Polish territory amid a Russian aerial assault on Ukraine on Tuesday evening, with an estimated 100 missile attacks launched at military and energy targets across the country.

Polish media reported that one or two missiles landed on a grain elevator in Przewodow some 20 kilometers from the Poland-Ukraine border, killing two civilians.

The deadly incident in NATO member Poland has sparked concerns of further military escalation or even direct confrontation between NATO and Russia. Poland has placed its military on high alert in response to the strike.

Poland’s President Andrzej Duda on Wednesday said it was “very likely” that the deadly missile that struck a Polish border village was from Ukraine’s air defense.

“Absolutely nothing indicates that this was an intentional attack on Poland… It’s very likely that it was a rocket used in anti-missile defense, meaning that it was used by Ukraine’s defense forces,” he told reporters.