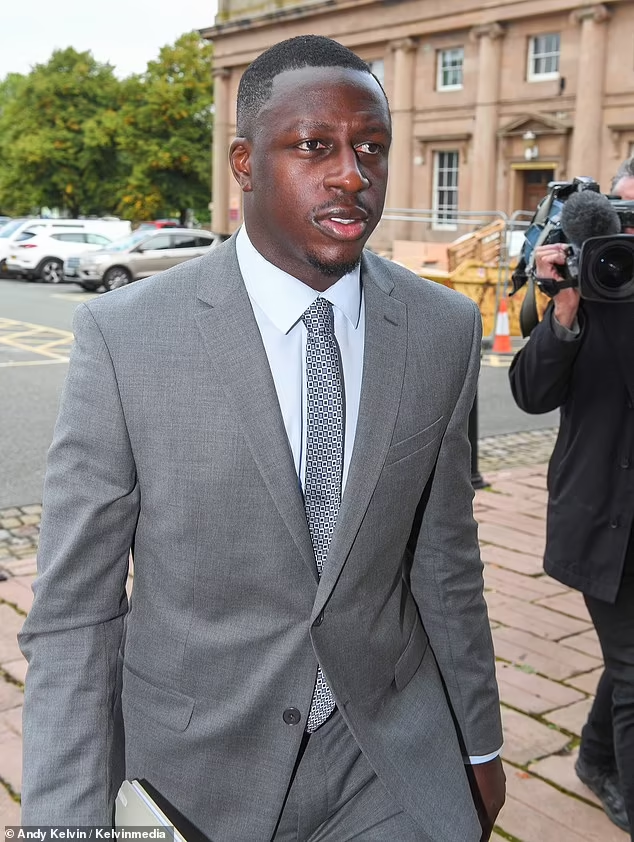 Manchester City defender, Benjamin Mendy was today compared to Jimmy Savile as he was branded a ‘serial predatory rapist’ by the lawyer prosecuting him at trial.

A jury were told as the case entered the closing speeches stage that left-back Mendy, 28, could not face up to who he really was.

And his co-accused and alleged fixer Louis Saha Matturie, 41, was accused of living in an ‘unreal word ‘ featuring ‘arrogant assumptions that every woman who came to their parties was good for sex’.

Mr. Cray told the jury of eight men and four women in his closing speech: ‘For all the good sides to Benjamin Mendy’s character, there is a dangerous streak which makes him a predator. We say a predatory serial rapist.

‘We say that Matturie shares the same dangerous streak toward young women he meets and has taken opportunity to have sex with woman half his age.

‘The situations that these complainants were walking into were toxic and dangerous. The danger was created by the defendants. The parties had an ever-changing cast of young women where the defendants had knowledge and control.

‘It gave them the opportunity to abuse that knowledge and power. The defendants were, and still are, living in unreal world. Mr. Mendy has conceded that it was only prison which brought him up short and made him start to change his ways.

‘But that concession goes nowhere near far enough. The defendants still cannot face up to what they did or to the real harm they caused.’

Mr. Cray said that the fact that Mendy did not use a condom showed he had ‘ no interest ‘ in the interests of the women or the risks of sexually transmitted diseases or pregnancy.

He said the similarities in the allegations between some of the complainants were ‘obvious.’

Mr. Cray said:’ They were all young women. They found themselves alone with the defendants. He was the one responsible for ensuring they were alone. He either raped them or tried to rape them.’

He added: ‘These parties had an ever-changing cast of young women and both defendants wanted, and did, have sex with them. Of course there were woman who did agree to have consensual sex but the defendants made the arrogant assumption that if they were at the party, they were good for sex.

‘And when some weren’t, it made it more likely that they did not hear the word ‘ no’. They thought they could get away with it.’

He said that Mendy now accepts his world was ‘ out of control with sex, money and parties ‘ but had not shown any remorse or had ‘ grasped that his behaviour had crossed the line and would get him into trouble.’

Mr. Cray told the jury:’ Celebrity is absolutely no guarantee of true good character. Celebrity in general is really good cover to hide the dark side of your life and get away with it. Look at Jimmy Savile who fooled the nation.’

Elanor Laws, KC, for Mendy told the court in her closing defence speech that Mendy’s £4.7 million home in Prestbury, Cheshire was ‘ no house of horrors.’

She said:’ These parties were chaotic and open house with very little security. Not only did these women want to go there, they went back again and again. This is not a grooming or sex trafficking trial.We are not dealing with children or girls who had no choice. These are not vulnerable teenagers with no choice of their lifestyle.

‘They wanted to go to these parties. They want to go clubbing, to go to VIP areas, to dance and have fun and to meet people like Mr Mendy. They wanted a little stardust by meeting a footballer.

‘They are young women deciding for themselves to have sex with people they have not met before. That is their choice. This is not a court of morals and they are deciding to have sex without contraception.

‘The prosecution are making them out to be victims but in the real world, these are women who went to parties,made adult choices and sometimes regretted them.’