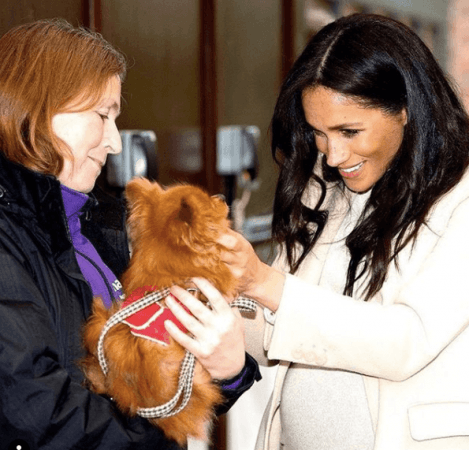 Meghan Markle’s love for dogs is not a secret. The Duchess of Sussex had two dogs, Bogart and Guy, before she moved to the UK and she has reunited with just one of them.

Markle is reportedly not planning to get beloved labrador-shepherd crossbreed Bogart to live in their luxury mansion in Beverly Hills even though they brought Guy, a beagle, to live with them.

According to The Sun, the reason behind not reuniting with her first dog in LA is to do with Prince Harry. The report said that despite adoring Bogart, which was a rescue dog she adopted after Ellen DeGeneres told her to do so, she wouldn’t be taking him back as the pet allegedly doesn’t get along with the duke.

“Bogart never took to Harry when they spent time together in Canada,” Wootton’s source was quoted as saying by The Sun. “He didn’t like Harry. Meghan was very vocal about the fact it wouldn’t be fair to take him back full-time, given Bogart’s feelings for her husband.”

Meghan and Harry have been living with their one-year-old son Archie. They currently have two dogs with them in LA, Guy and Oz, a black Labrador the couple had adopted. But Meghan’s affection towards Bogart is hard to overlook as she often said Bogart and Guy meant the absolute world to her.

She would often refer to them as “my loves” and “my boys.” When the duchess had moved to the UK, Bogart was reportedly living with her “very close friends.”