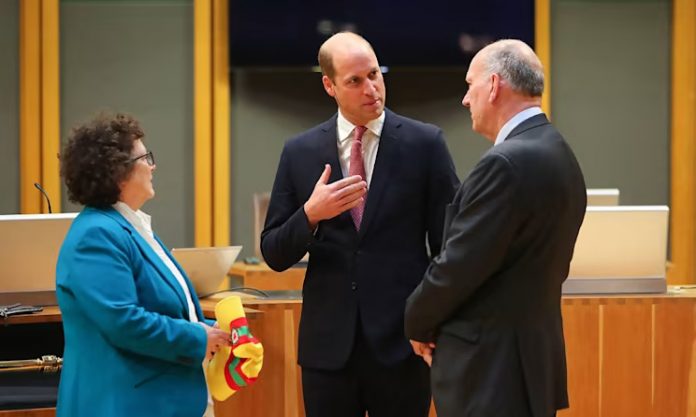 The future King, who was created Prince of Wales by his father the King in September, tackled the subject head-on during a lighthearted chat with the Llywydd Elin Jones during a tour of the Siambr.

The Presiding Officer showed the Prince her Wales football bucket hat, which she had on her seat inside the chamber and said: “They play each other in a few weeks’ time. I won’t ask you!”

But he replied: “No, it’s ok, I’m telling everyone I’m supporting both, definitely. I can’t lose. I’ve supported England since I’ve been quite small. But I support Welsh rugby and that’s my way of doing it.

“I happily support Wales over England in the rugby so I’ve got to be able to play carefully with my affiliations. I worry otherwise if I suddenly drop England to support Wales then that doesn’t look right for the sport either. So I can’t do that.”

“We can agree to disagree,” said Ms Jones.

“An England v Wales World Cup final would be the best, that would be pretty good,” added William.

He went on: “I’m making sure I’m out there supporting Wales through all the process because I know it’s a big deal for Wales. When I was growing up, Wales wasn’t getting through to the tournaments, so I had to make a choice.”

The Llywydd told William: “I’m much older than you and when I was growing up Wales weren’t getting through to the tournaments,” adding that there had been some “horrible results.”

Ms. Jones, a football fan, said she would not be going because the World Cup is taking place in Qatar, adding: “It’s tragic that it is in Qatar, but the First Minister is going out and that’s going to be absolutely fine for him to go out, in my view. But it’s confusing… we have this great huge happiness about it but then it’s a shame it’s in Qatar and a lot more people could enjoy it.

“The Euros in 2016, were glorious. I was there at the game when Wales beat Belgium 3-1 and that was absolutely fabulous,” she added.

“But we will have the rugby world cup in France next year, that will be a big deal,” said William.